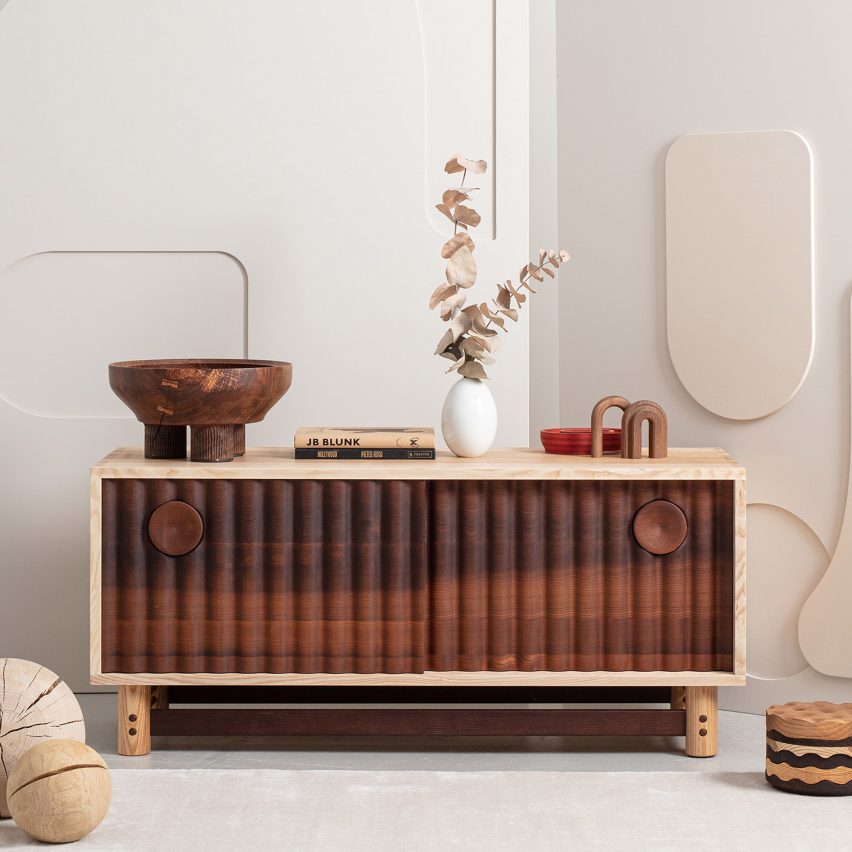 Named Bowater, the studio’s first complete range has nine pieces, including a desk, chest of drawers, sideboard, stool, side table, shelving and a number of smaller catchalls and decorative objects.

The furniture is all made from wood that is treated using a process called Thermo modification, which is usually reserved for outdoor uses such as cladding and exposes the timber to intense, controlled heat in order to strengthen and stabilise it.

“A by-product of this process is the resulting colouration of the wood,” said Jan Hendzel Studio founder Jan Hendzel.

“Baking caramelises the natural sugars in the timber, which creates this beautiful rich umber that, when oiled, is eye-catchingly beautiful,” he told Dezeen.

The result is a spectrum of deeper shades that are usually only associated with exotic species such as teak or mahogany. These are used across the Bowater collection alongside the wood in its traditional, light finish.

“As a business that is rooted in sustainability, we’re really excited to be able to experiment with the materials on our doorstep,” said Hendzel.

“We’re proud to be producing furniture that shows support for lesser-used British woods and we hope to create a growing demand for what’s available here in the UK.”

A distinctive ripple detail features across the collection and can be found in the desk’s drawer and the lower shelf of the side table as well as the doors of the sideboard and chest of drawers.

“The texture has a brilliant way of showing the depth of colour in the baked timbers and helps to reveal the timber’s grain in a playful way,” said Hendzel.

“But we also realised the texture could transform from a decorative facade to something functional. The ripple can be used as a drawer pull or an interlocking device between items.”

For example, the wooden dishes and trays, as well as the interior of the desk drawer all, feature this undulating profile, meaning one can slot neatly into the other to secure the catchalls in place.

The collection combines modern and traditional carpentry methods, with the ripple detail milled by programmed CNC machines while the round handles that feature in the chest of drawers and the console table are hand-turned.

“By combining this digitally-led design approach with our intimate understanding of traditional joinery and hand tooling, we were able to add textural complexities to the range without losing the hallmarks of handmade furniture,” said Hendzel.

In order to minimise waste, Bowater was designed as a cohesive whole, with offcuts from the furniture pieces used to create the smaller accessories such as a pair of wooden sculptural arches.

Any other unusable pieces were donated to Men in Sheds, a local charity that engages older men in collective activities that benefit the community.

The collection is currently on show as part of the Peckham Design Trail at LDF, which marks the first time the south London district is officially part of the festival.

“I’ve been a resident in Peckham for 14 years and what’s been lovely about organising the trail is getting to know the community better,” said Hendzel.

“Next year we’d like to be able to build on some of the relationships we’ve made and create a design district for a diverse SE15 community that helps showcase the wealth of unsung artists and designers that live locally.”

Hendzel, who studied product design at Central Saint Martins, set up his studio in 2015 with a focus on championing the UK’s homegrown material palette.

Previously, the studio has created a family of idiosyncratic valet stands for a hotel in Hertfordshire and series of wooden furnishings for a pop-up cafe in London’s Camberwell College of Arts.