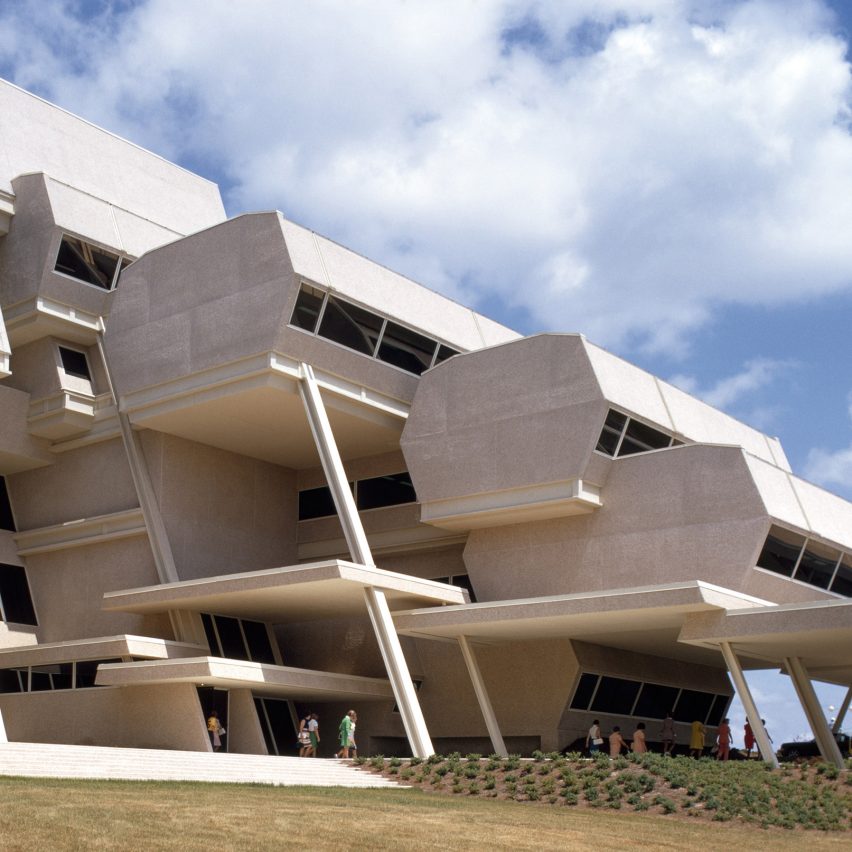 Preservation groups are fighting to save Paul Rudolph‘s Burroughs Wellcome building in North Carolina, one of his “most significant projects”, after discovering its current owner had secured a demolition permit.

The Paul Rudolph Heritage Foundation, Preservation North Carolina, Preservation Durham and non-profit conservation group Docomomo US are working to raise awareness in order to preserve the building, which the celebrated architect completed in Durham, North Carolina in the 1970s.

Kelvin Dickinson, president of Paul Rudolph Heritage Foundation, which is based in New York City, said he first learned of the plan following a tip-off from a local resident.

He initially thought the owner, biotechnology company United Therapeutics, was undertaking asbestos abatement but discovered it secured a demolition permit on 4 September.

“A guy down in North Carolina who lives down the street from the building reached out to me and said, I see that there’s a construction fence and there’s construction equipment going up,” Dickinson told Dezeen.

“Somebody from the demolition crew also posted some pictures on Google Maps, saying this a beautiful building, it’s a shame it’s going to be demolished,” he added.

“That sent the alarm bells off.”

According to Dickinson, United Therapeutics filed for the permit after it was advised by a construction department that restoring the building, including removing asbestos, would require significant work.

Dezeen contacted United Therapeutics for comment but is yet to receive a response.

United Therapeutics originally planned to demolish Burroughs Wellcome when it first purchased the building in 2012, but curtailed these plans so that only part of the structure was torn down in 2014.

Dickinson said the company told him the rest of the existing building would be transformed into “a mini museum”.

As the building is privately owned and is not recognised as a landmark, the foundation and preservation groups are now working to save the building and encourage United Therapeutics to take alternative options by raising awareness of its demolition and cultural history.

“Reacting to a demolition permit is not how any of us like to work,” added Docomomo US executive director Liz Waytkus.

“We are trying to get to the bottom of why United Therapeutics changed the scope of the work from asbestos abatement to full demolition,” she continued. “I don’t know if anyone has talked to them about the tax benefit of adding the building to the national register and future additions.”

“Other than standing in front of bulldozers, there’s nothing we’re going to be able to do other than just raise awareness,” Dickinson added. “I would appreciate it if there was all this effort put into it to try to save the building before it’s demolished. Let’s see it, let’s share it.”

“One of Rudolph’s most well known, most loved and most significant projects”

Burroughs Wellcome was completed in 1972 for a pharmaceutical company of the same name. Measuring 312,303 square feet, it marks one of Rudolphs’s largest buildings.

The American architect was asked to design a building that would be flexible and so created a series of volumes with hexagonal ends that could be added to over time. The exterior has a textural finish formed of limestone aggregate that is also partially used inside.

“It is one of Paul Rudolph’s most well known, most loved and most significant projects,” said Waytkus.

The building was the location for Burroughs Wellcome’s development of AZT, the first drug approved by the US Food and Drug Administration for the treatment of Acquired Immune Deficiency Syndrome (AIDS). It also provided the set for 1983 American science fiction film Brainstorm.

“In this case, we’ve got several examples at the building was the setting for several cultural events that would make anybody, anywhere else nominate the building as a landmark, for several reasons,” Dickinson added.”We believe that this is why the building is getting so much support from the community.”

“This doesn’t normally happen with a Rudolph building,” Dickinson added. “It is normally saved because the building is good and of Paul Rudolph.”

Born in Kentucky in 1918, Rudolph studied architecture at Alabama’s Auburn University, formerly known as Alabama Polytechnic Institute, and at Harvard Graduate School of Design (GSD) under Walter Gropius of the Bauhaus school.

Demolition work also started this year on Rudolph’s 1970s brutalist housing complex Shoreline Apartments in Buffalo, New York. The work was initially halted two years ago when a resident refused to move off the premises.

Other brutalist buildings by Rudolph include Yale University’s architecture and art building, which is celebrated as one of the earliest known examples of the style architecture in America, and Hong Kong’s Lippo Centre.