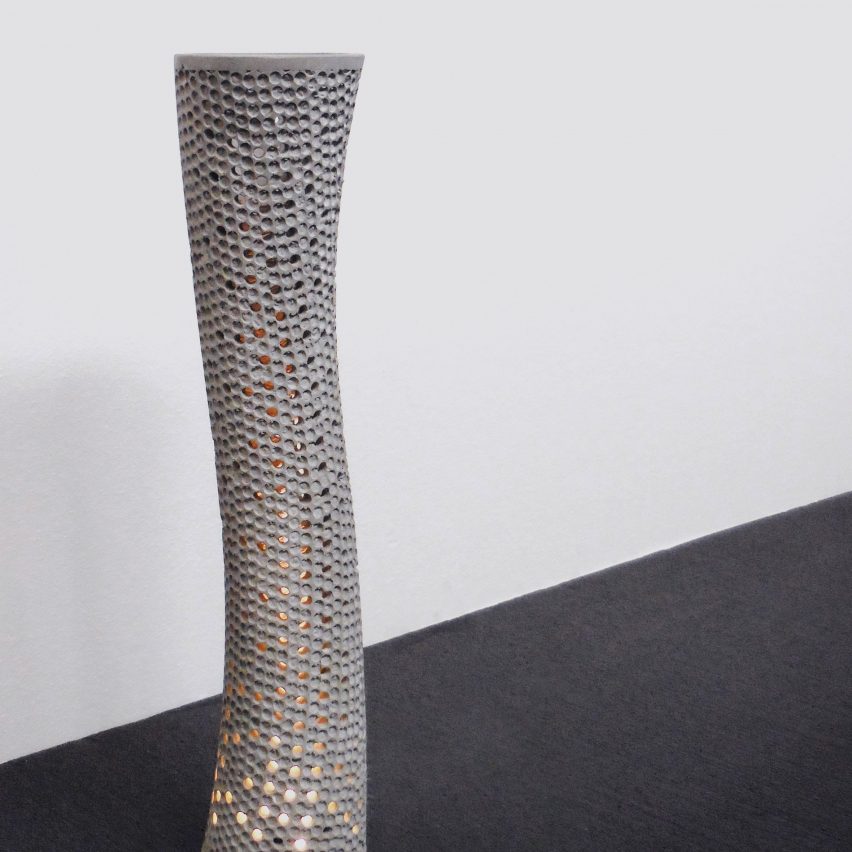 Discarded bubble wrap helps form the bumpy surface texture of Hagen Hinderdael’s Bolla light, which is been shown as part of the Dezeen x Planted collaboration at this year’s London Design Festival.

London-based design studio Hagen Hinderdael says the materiality and production process of the Bolla light is meant to highlight the need for a circular economy – and to cut our use of plastic packaging.

“Landfills can’t cope with the quantities of plastic being deposited, some of it poisonous and most of it non-degradable,” explained the studio, which is led by Sofia Hagen and Lisa Hinderdael.

“Bolla captures the essence of ‘waste not, want not’ – creating an innovative and sustainable new light product.”

To create the light, concrete aggregate is cast against formwork that’s been CNC cut to feature an imprint of salvaged bubble wrap.

The aggregate was custom made by Hagen Hinderdael alongside material scientists from Cemento, and contains a mixture of concrete and recycled plastic.

Different coloured pigments can be incorporated into the mixture so that the light to complement specific interiors.

The Bolla is organic in shape and gently winds upwards to a height of 70 centimetres. While designed for use as a floor lamp, it can additionally be converted into a wall sconce or pendant light.

Perforations dot across the exterior of the light which allow LEDs fitted on the interior to shine through. The studio developed a special script to work out where exactly to place the holes, in hopes of fostering a “striking and effervescent glow”.

Should it break, buyers can also send it back to the manufacturers where it will be ground up and reused to make another light.

“This allows Bolla to avoid it’s materials ending up back in a landfill – and brings our narrative full circle with the Hagen Hinderdael ethos of a continuous afterlife,” concluded the studio.

Planted is a contemporary design event, which aims to reconnect cities with nature will make its physical debut as part of London Design Festival alongside an online trailer for next year’s main event.

The Planted x Dezeen collaboration presents a series of projects by international designs that align with the ideals of the Planted design event.