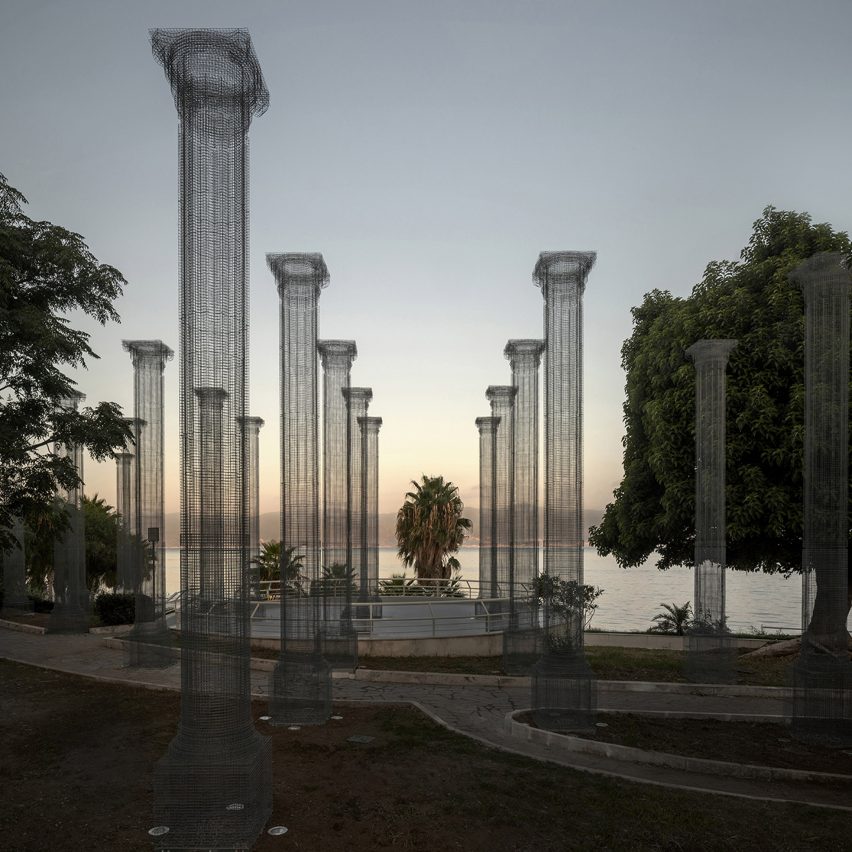 Artist Edoardo Tresoldi has placed 46 columns in a park in the Italian city of Reggio Calabria to create a permanent installation called Opera.

Built in the park of via Giunchi on the seafront of Reggio Calabria with views across the Strait of Messina to the island of Sicily, the architectural installation was created to be a place of contemplation.

“When I came to Reggio Calabria I found in the park that would have become Opera’s location an intimate and snug spot in which to take a moment from everyday life and contemplate Sicily across the sea,” Tresoldi told Dezeen.

“Contemplation is an occasion of pure listening and connection with the place, Opera’s pillars celebrate these simple moments,” he continued.

In total Tresoldi installed 46 columns, the tallest of which is eight metres high, throughout the park to create a series of colonnades. Each of the columns is made from an open wire-mesh structure and lit from below by spotlights.

By recreating the language of classical architecture in a semi-transparent form, Tresoldi hopes that the installation will encourage people to think about the space they are in.

“Opera is born to celebrate the relationship between the human beings and the surroundings, the Strait of Messina, a magnetic place which I consider the actual eternal monument of Reggio Calabria,” Tresoldi explained.

“I simply wanted to add a further key of reading to a location that is yet able to speak itself,” he continued.

“As in my previous works, classical architecture is a tool to celebrate the sacredness that man finds in places.”

The columns were placed to enhance and frame views across the Strait of Messina, but do not follow the positioning of existing paths with the park.

“The pillars create an experiential path marked by different moments and define multiple openings to the landscape based on the points of view,” said Tresoldi.

“I found it interesting to overlap two different architectural systems – the rationality of the pillars’ distribution and the organicity of the park – by meaning them as two different musical melodies that work together following harmonies and disharmonies. Their disharmonic relationship contributes to create ever-changing architectural compositions.”

Opera opened to the public on 12 September along with a sound installation created by Italian musician and composer Teho Teardonarrated that aims to articulate different parts of the day.

Artist Tresoldi has previously used wire mesh to create a range of pavilions and architectural compositions. In Italy, he reconstructed an ancient Roman church using the material, while in Suadi Arabia he built a multi-sensory pavilion in Riyadh.

Photography is by Roberto Conte.