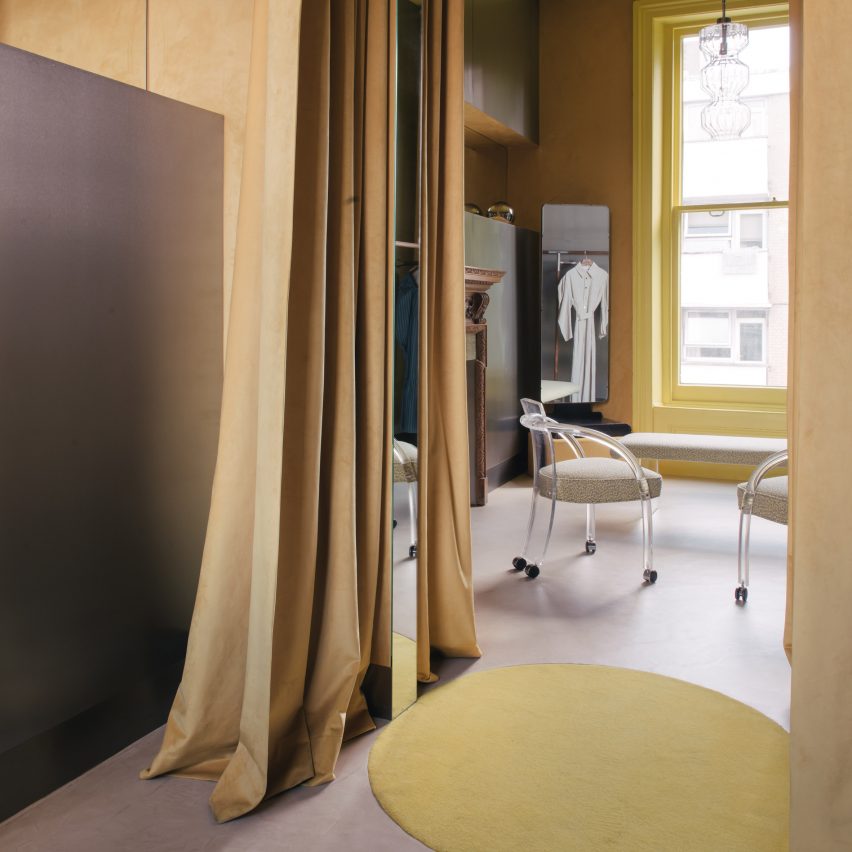 Sella Concept said it drew upon “untapped maximalist style” to design Sister Jane Townhouse, which takes over a prominent corner property on Golborne Road in the affluent neighbourhood of Notting Hill.

Having outgrown their old studio on the nearby Portobello Road, the fashion brand had been keen to move into a larger space that could offer a more immersive retail experience.

The three-storey townhouse incorporates a restaurant, a showroom and an office where employees can plan and design future clothing collections. On the roof there is also an outdoor terrace where visitors can gather for drinks.

When it came to developing the interiors, Sella Concept sought to reflect the retro style of Sister Jane’s billowy blouses and dresses. The studio’s co-founder, Tatjana Von Stein, particularly found herself referencing the aesthetics of the 1970s.

“I must admit that I am always inspired by the ’70s forms, shapes and use of space,” Von Stein told Dezeen.

“There is a movement and warmth in its design history that I love to employ with a contemporary twist.”

On the ground floor of Sister Jane Townhouse is the restaurant, called Cha Cha’s, which serves up a roster of Latin-fusion brunch dishes.

The space has peach-coloured walls and is dominated by a huge hexagonal, brass-edged bar counter. It’s surrounded by a series of Deja Vu stools by Masquespacio that boast tiers of mauve, cream and beige fringing.

Fringing also skirts the burnt-orange seating banquette that winds around a corner of the room, and runs along the edge of the six-sided dining tables. Mustard-yellow lamps with fringed shades have additionally been dotted throughout as decor.

Cha Cha’s includes a collage wall which will be plastered with different striking images from Sister Jane’s fashion campaigns.

The wall runs directly beside a brass-tread staircase – the steps had previously been closed in by a partition wall, but Von Stein knocked this down to encourage diners to explore the showroom on the first floor.

Upstairs in the showroom, surfaces take on a pinkish hue.

Some clothes are displayed within a veiled pod that sits at the centre of the room, enclosed by sheer white curtains. Other garments hang from custom-made walnut rails or are presented on mannequins which perch on a curvaceous platform covered in teal-blue carpet.

A short walkway leads through to a room that showcases Sister Jane’s Ghospell line, which offers pared-back clothes with sculptural silhouettes.

This space has aptly been given a slightly more minimal finish – walls here are either clad in steel or upholstered with buttery yellow velvet, while the changing room is entirely lined with mirrored panels.

Wooden flooring that runs throughout the rest of the townhouse has also been replaced here by micro cement.

Above the showrooms are the offices for Sister Jane staff, followed by the roof terrace dressed with comfy cushioned benches and green wire-frame chairs.

Guests can alternatively relax in the secret ground-floor garden room, which is accessed via a door disguised as an antique armoire.

“We have a true inclination for concept spaces which indulge in all the senses and offer the design challenge to seam together a variety of experiences and brands,” explained Von Stein.

Sella Concept was established by Tatjana Von Stein and Gayle Noonan. Previous projects by the studio include Public Hall, a plush co-working space that occupies the former office of the UK secret intelligence service, and Night Tales, a pink-tinged cocktail bar.

At the end of last year the studio also debuted its first furniture collection, which comprises a series of curvaceous stool seats.

Photography is by Genevieve Lutkin.