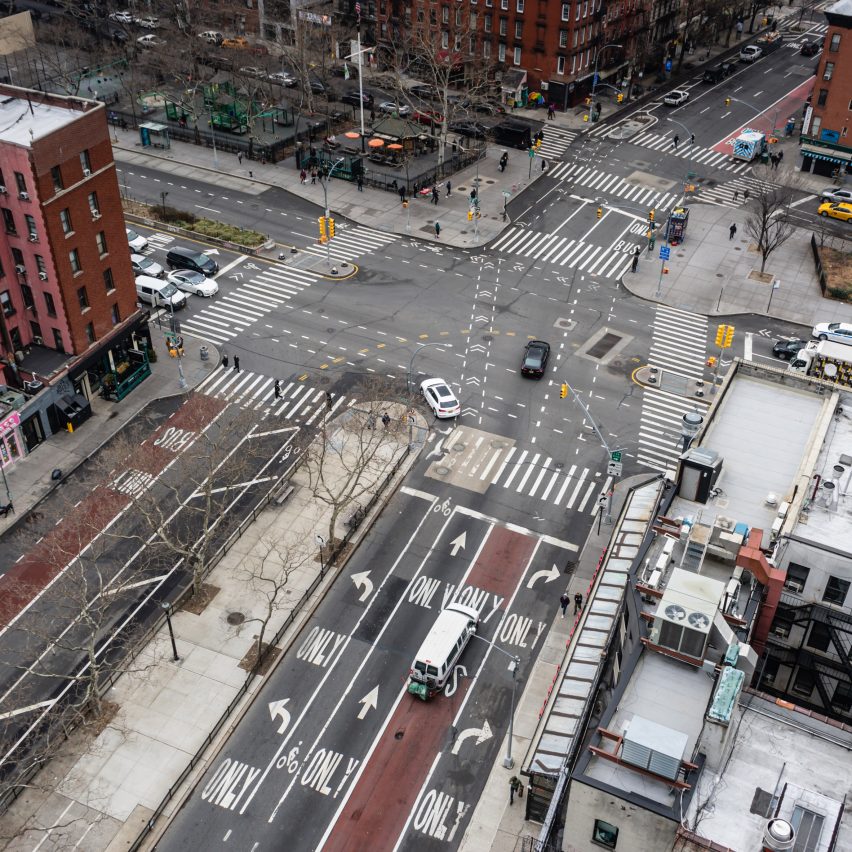 Reintroducing the concept of crossroads into the discourse around public space could help make architecture more inclusive, suggests Aaron Betsky.

We are standing at a crossroads. We must make this country more just and a true home to all races. In addition to racial justice, access and support of African-Americans into the academy and the profession, and an end of the architecture profession’s complicity with racial violence, one small thing we can also do is to develop other models and metaphors for space in this country – ones that would be open in every sense of the word, and offer alternatives to what we have today.

One of the inbred categories defining how we think about place in and through architecture is the separation between public and private space. This dichotomy is itself embedded with a particular manner of thinking about our bodies, our boundaries and our sense of kinship. We accept those notions as fundamental, or at least did until thinkers such as Frantz Fanon and, later, Donna Haraway, began to point out how they are socially constructed to reinforce ideas about race and gender.

We should therefore be asking deeper questions about what privacy and publicity or publicness means. In the field of architecture, we could start with one distinction we take for granted: that our cities, suburbs and villages are made up of the building blocks of individual homes and other buildings, which either leave room for or actively create something we call public space.

In this country, that space is mostly what is left-over. It is the place of circulation more than anything else, as in American cities over 60 per cent and up to 80 per cent of all the built-up area is given over to roads and parking. Sprinkled through that emptiness are shaped, shared spaces: parks, meant for recreation; spaces for commemoration or civic gathering; and spaces of open or shared commerce.

The latter two often overlap, with our squares and plazas being places where you can also (though only at the margins) find outdoor dining, kiosks, and perhaps even markets. Recently, the first two parts of this triad have also become more coincident, as we think of our public spaces as being green and recreational, often with a little dose of art – think of the sculpture park in Seattle, the new civic space in Cleveland, or New York’s High Line.

I would suggest another model for such public space, one that is inherent in the world of communication at the heart of our global economy and culture and might be a flip and reverse of all that paved quasi-public space. That is the crossroads. It is a space and a metaphor deeply rooted in most cultures around the world. It is where you meet, where you mingle, and where you make choices. The crossroads is of particular importance in West African and particularly Yoruba tradition as the place where you decide between good and evil, and where your world can also turn into another, mythical version of itself.

The crossroads is thus not quite a village and not quite a city, but rather the germ of both of them

As a majority of slaves forced to the United States came from this area, they brought the crossroads tradition with them, and we have long recognised the image in music: the crossroads is where the blues guitarist Robert Johnson met the devil and turned into the greatest musician that genre had seen. Bone Thugs N Harmony took up the theme recently, and it entered into white consciousness through Cream’s song of that title.

But the crossroads is also a place, albeit one that is difficult to define. It is, in fact, one of the generators of settlement in this country. Crossroad settlements in the Colonial era (and in Europe before that) were places where a general store, a tavern, and a church might cluster around the meeting point of two highways. Later this site might also be where the gas station, by now a meeting point for many rural areas, would be built.

The crossroads is thus not quite a village and not quite a city, but rather the germ of both of them. At its edges an array of porches, hitching posts or watering points, as well as small memorials or shrines, appeared and later proliferated into more stalls, services, and small parts of our infrastructure. In the urban context, the corner store, the crosswalk, and the place where you are “standing on the corner, suitcase in my hand” in “different times” before you become a banker or a clerk. It is also, of course, the place of temptation, of drugs, and of the beginning point of a walk down the evil, or at least wild, side.

In the pre-Civil War South, the crossroads and its community offered an alternative to the forced enclosure of the plantation dwellings and, later, tenements. It was a place of informal gathering and, for a few, the beginning of a trip to freedom. It is also, in a positive sense, exactly not the defined and socially limited public space circumscribed by its uses for leisure or commemoration with a little commerce mixed in. The crossroads is a fluid, amorphous and, exactly because of that condition, difficult to govern or police place. It is a space of freedom in all its possibilities and danger.

White people and capitalism took over the crossroads and internalised it into the atrium. The fake public space of the shopping mall is dominated by the crossroads where zigzagging escalators move past palm trees and kiosks to give you a sense of freedom while containing you within the framework set by the building.

Certain architects, such as, for instance, this year’s Pritzker Prize winners, Yvonne Farrell and Shelley McNamara, have made the crisscrossing, three-dimensional crossroads as atrium the signature and dominant element in their buildings while denuding it of its power and possibilities.

This is as much an anodised version of the crossroads as the power rock anthem is the operatic burial ground of the blues. It is beautiful but safe and restricted in its emotions and reality.

Could crossroads be an alternative model for what we think of as public space?

Can we figure out how to reactivate the crossroads? Can we learn from the usually hidden traditions that course through the spaces of America without ever acknowledging their roots? Can we open up both our small communities and our cities at and through the crossroads? Could crossroads be an alternative model for what we think of as public space that might let us hang out in our individuality and could it take us down “ghost roads” into other and better possible futures?

Or must we sell our soul to the devil of surveillance and the eradication of space that could truly bring us together to enjoy those possibilities? And, would any attempt to use the crossroads as a building block for a new kind of shared space not be yet another appropriation of African-American culture?

I do not know the answers to these questions, but I would suggest that a serious acknowledgement and celebration of the fact that we do not suddenly stand at a crossroads in the country, but that African-Americans have stood there since the beginning of this republic, waiting to find out whether we can live up the dream of a true democracy, might be a good place to start.

Photo of New York City intersection is by Jason Krieger on Unsplash.

The post “The crossroads is a space and a metaphor deeply rooted in most cultures around the world” appeared first on Dezeen.