Ini Archibong designs rock-like furniture with its own drainage system 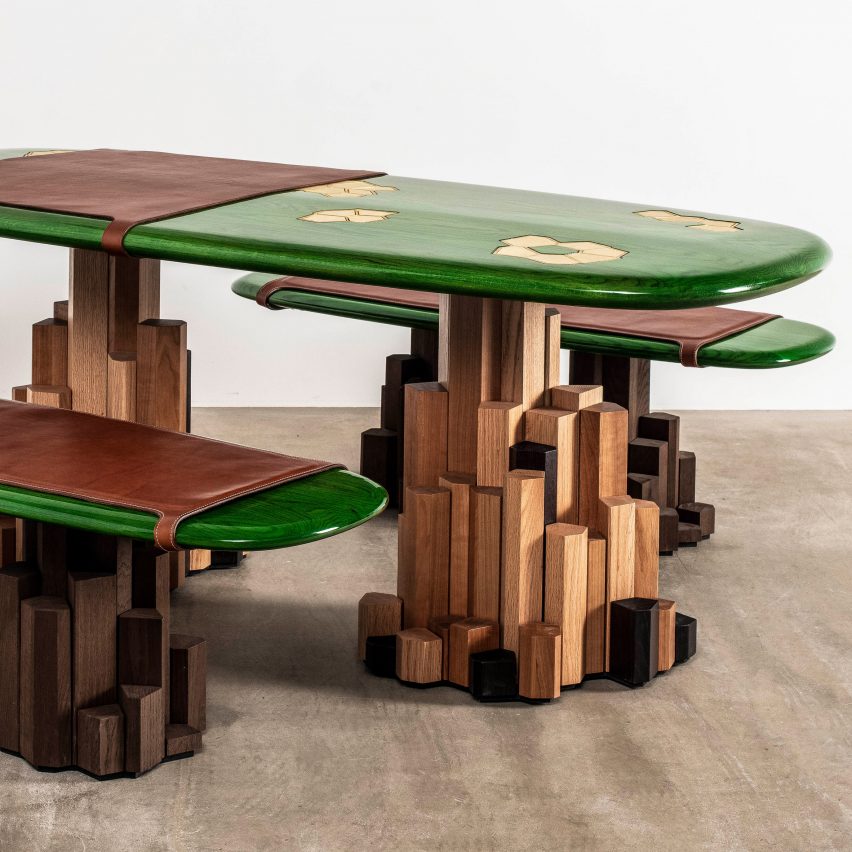 Designer Ini Archibong took visual cues from the staggered rock formations of The Giant’s Causeway in Northern Ireland when creating his Kadamba Gate table and benches, which were showcased during London Design Festival.

The furniture, called Kadamba Gate, was directly inspired by the hexagonal columns of basalt rock that make up The Giant’s Causeway on the north coast of Northern Ireland.

These undulating obelisks are represented by chunks of wood cut into different shapes at varied heights and secured together in random formations.

Archibong wanted them to appear as if “reaching from the core of the earth up to the sky”. The sky is interpreted as smooth, green-stained tabletops and seat surfaces.

“That led me to being inspired by The Giant’s Causeway and its columns of basalt hexagons,” he continued. “The concept is to create a form of language for the base reaching up from the ground to hold the tabletop, which represents the sky.”

The craggy bases of the table and benches have been made from pieces of American cherry, red oak and thermally modified red oak that was considered defective or unusable, and would otherwise have been discarded.

Archibong used algorithms to generate organic-looking shapes for the wood fragments to be carved into, in a bid to make them look imperfect and non-repetitive. These are supported by metal base plates and frames.

The wooden bases are overlaid with smooth, even surfaces that have been coated with forest-hued laminating epoxy resin, giving them a glossy finish.

As the furniture items are intended for outdoor use, this coating also works to seal the wood, making it waterproof.

The tabletop has a subtle camber to allow rainwater to drip away onto the floor. This is aided by an integrated drainage system in the table, which is disguised as honeycomb-shaped brass detailings inlaid into the wooden surface.

These brass polygons are connected to tubes, and can be removed from the table surface. Water would run down the slightly domed table into the brass elements and through the tube before dropping out of the bottom.

Removable vegetable-tanned leather seat pads made by Bill Amberg Studio have also been designed to top the table and seats.

According to the designer, this mix of different materials – the irregular scrap pieces of wood, the glossy resin with brass details, topped with leather elements – illustrates the situation that humanity has found itself in as a result of the coronavirus.

“When you step back and look at it collectively, it makes for a beautifully composed whole,” said Archibong.

The Kadamba Gate furniture was created as part of the Connected project, which was organised by the Design Museum in collaboration with the American Hardwood Export Council (AHEC).

It tasked nine designers from across the world to design a wooden desk set up that “suits their new ways of working from and living at home” since the coronavirus pandemic.

As Archibong is based in Switzerland and often works outside on his balcony, he wanted his table to be able to withstand the harsh weather conditions.

All nine pieces were created in collaboration with the carpenters of English furniture maker Benchmark, and will be on display at the Design Museum in London from 11 September until 11 Oct 2020.

Other participating designers included Thomas Heatherwick and Sabine Marcelis, who created a modular desk with wooden planters as legs and a work-from-home cubicle with a bright yellow interior that can be folded away.

The post Ini Archibong designs rock-like furniture with its own drainage system appeared first on Dezeen.