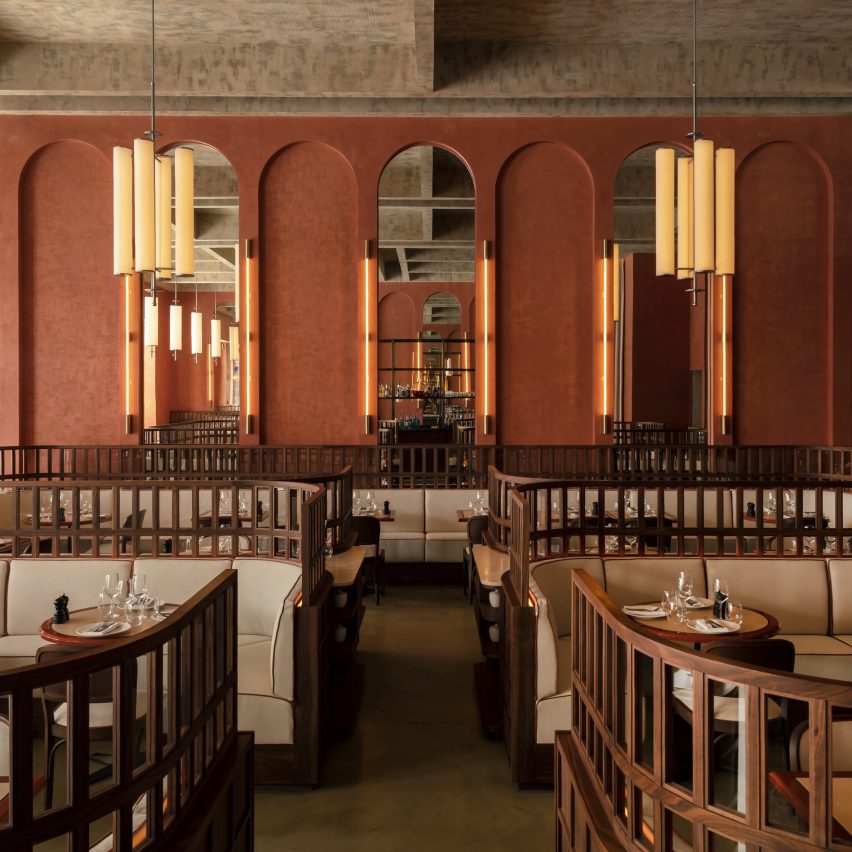 Whelan – who leads artist collective The Guild of Saint Luke – told Dezeen that, prior to his intervention, Maison François simply looked like “one giant concrete cube”.

The materiality of the space immediately encouraged Whelan to base his interiors scheme around La Fabrica – an abandoned cement factory just outside of Barcelona that Spanish architect Ricardo Bofill transformed into offices for his practice in 1973.

“I always try and find a creative route that respects the DNA of the building, and this felt appropriate,” said Whelan.

“Furthermore, the client wanted to reference historic brasseries but create a contemporary version – also reflected in the food.”

The exterior of Bofill’s La Fabrica is notably punctuated with soaring arched windows. These have been reinterpreted inside Maison François, which boasts terracotta-coloured stucco walls inset with shallow arch-shaped recesses.

“La Fabrica is probably the greatest home that I will probably never visit, and so the arches were a sort of ‘homage’ to that wonderful creation,” explained Whelan.

Walnut has been used to craft the restaurant’s seating banquettes – their latticed backs are inspired by the pews in Germany’s modernist Maria Heimsuchung church, which Whelan came across in a photography series by Robert Goetzfried.

Chairs have been upholstered in creamy linen to match the colour of the lacquered-wood dining tables. Tubular chandeliers have also been suspended from the ceiling, which has been finished with a faux-cement patina.

Mahogany has been used to craft a latticed hood above the open kitchen, where dishes that draw upon traditional French cuisine will be prepared.

Food will be served by both chefs and waiters, an attempt by the restaurant to diffuse the typical boundaries between front and back-of-house operations.

“Maison François will be everything a brasserie should be – welcoming, fun and hospitable, with classic dishes made with the best seasonal produce we can get our hands on – whilst also ripping up the rulebook when it comes to service,” said the restaurant’s founder, François O’Neill.

At the centre of the hood is a huge clock that Whelan had made bespoke from patinated nickel and bronze.

Weighing half a ton, the grills on the side of the clock are meant to subtly mirror those that feature on the front of vintage Rolls Royce cars, often seen outside the restaurant on the affluent streets of St James.

“The clock is a classic of historic brasserie design, and can be found around the world from Bouillon Julien in Paris to Fischer’s in London,” added Whelan.

“We wanted to have this iconic focal point but with our own style.”

Stairs lead down to Maison François’ adjoining wine bar, called Frank’s. This space is intended to have a slightly more industrial feel, so has been completed with exposed white-brick walls, polished concrete flooring and black-leather seating.

Bofill’s La Fabrica is referenced again at this level but this time in the form of arched mirror wall panels.

John Whelan established The Guild of Saint Luke in 2017, working with artists, artisans and architects to restore and revive historic French brasseries.

Photography is by Oskar Proctor.