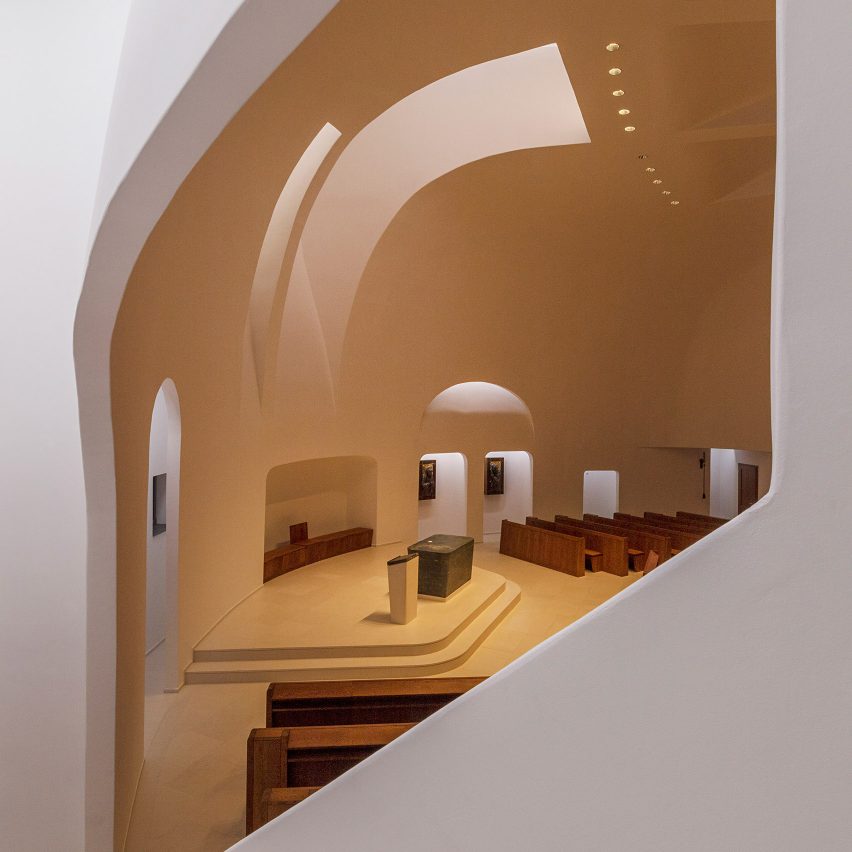 The Church of Pope John Paul II in Páty, Hungary, is a crescent-shaped building featuring skewed angles and whitewashed concrete that aims to turn “passive observers” into active participants of worship.

Local practice Robert Gutowski Architects filled the church in the village of Páty in Budapest with modern takes on traditional aspects of Medieval, ecclesiastical architecture.

The intention was to shift the emphasis towards the altar and the congregation to make the act of worship more engaging.

Traditional churches typically have a rectangular floor plan and are made up of a nave – the central part of the church – and an apse – the semicircular or polygonal area at the end of the aisle, usually located behind the altar.

The Church of Pope John Paul II, however, has an elliptical layout, made up of the crescent-shaped building of worship that wraps around an adjoining oval-shaped outdoor space.

Therefore what would typically be the nave of a conventional church functions as the churchyard or garden, while the liturgical space is situated where the apse would be.

As studio founder Robert Gutowski explains, this layout was designed to place more emphasis on the communal experience of the Eucharist and to “invite people closer to the holy act” at the altar.

“If you like, we invite people into the apse, surrounding the altar, forming a community,” the architect explained. “It is also similar to the liturgy of early times, when Paleochristians simply surrounded a table in their own home – what is known as Domus Ecclesiae.”

“The church clearly defines its purpose: while the Creator and the almighty God are at the centre of traditional liturgy, modern liturgical efforts have shifted emphasis to the recreator God, the image of a perpetually redeeming Christ,” Gutowski added.

“The Church of Pope John Paul II represents a conscious response to liturgical changes in recent decades, rendering it a model church experiment in contemporary church architecture,” he continued.

“Emphasis is shifted toward the active involvement of worshippers.The community is not a passive observer of events in a sanctuary, but rather actively experiences the holy act.”

Several rooms lead off of the central, liturgical space, including a communal room, a service room and an office on the ground floor, and an educational room, guest room, the priest’s living quarters, and access to the bell tower on the first floor.

Each of these rooms are enclosed in one, whole elliptical floor plan – a form chosen to symbolise “perpetuity” and to create a holistic space.

“The concept is that when we say ‘church’, this does not refer only to the part of the chapel, but rather to the whole community building in one singular form,” explained Gutowski.

The two ellipses formed by the crescent-shaped church and the adjoining yard have been set at different axes. This is following the historically “inaccurate” layout of traditional churches, wherein the nave and the apse tend to be slightly off-centre of each other.

“We cannot name one single church that sits on the same axis, because pretty much all of the historical churches in Europe have this tiny ‘mistake’, which actually became a symbol of the broken body of Christ,” added Gutowski.

This symbol of Christ’s broken body has been extended to the church interior, which features walls set at slanted, uneven angles.

The domed ceiling, made from reinforced concrete, is lined with spotlights that illuminate various sacral functions such as the area of the altar and surrounding alcoves filled with religious artworks.

A rectangular cutout in the ceiling also fills the room with natural light, which is directed particularly at the centre towards the altar.

While the majority of the interior has been painted white – bar the natural-wood pews – the altar is carved from a single block of deep green onyx stone, standing out from its surroundings to serve as the focal point of the space.

The structure itself is symmetrical but every detail is asymmetrical, such as the alcoves. The altar is the only element that sits on the main axis of the building.

Steps made of white Carrara marble lead up to the altar, which have trapezoid-shaped surfaces with rounded corners to allow gathering around the sanctuary space.

The design and construction of The Church of Pope John Paul II was carried out with the help of the local community. The church was built mainly using donations, and was consecrated in 2019.

The church has been shortlisted in the civic and cultural interior project category of this year’s Dezeen Awards.

Other projects in this category include a crematorium in Belgium designed by Rotterdam-based studio Kaan Architecten, which is made up of one rectilinear volume made from blocks of unfinished concrete.

A museum for children in Pittsburgh has also been shortlisted in the civic and cultural interior project category, which US firm KoningEizenberg Architecture renovated from the remains of a historic library that was struck by lightning.