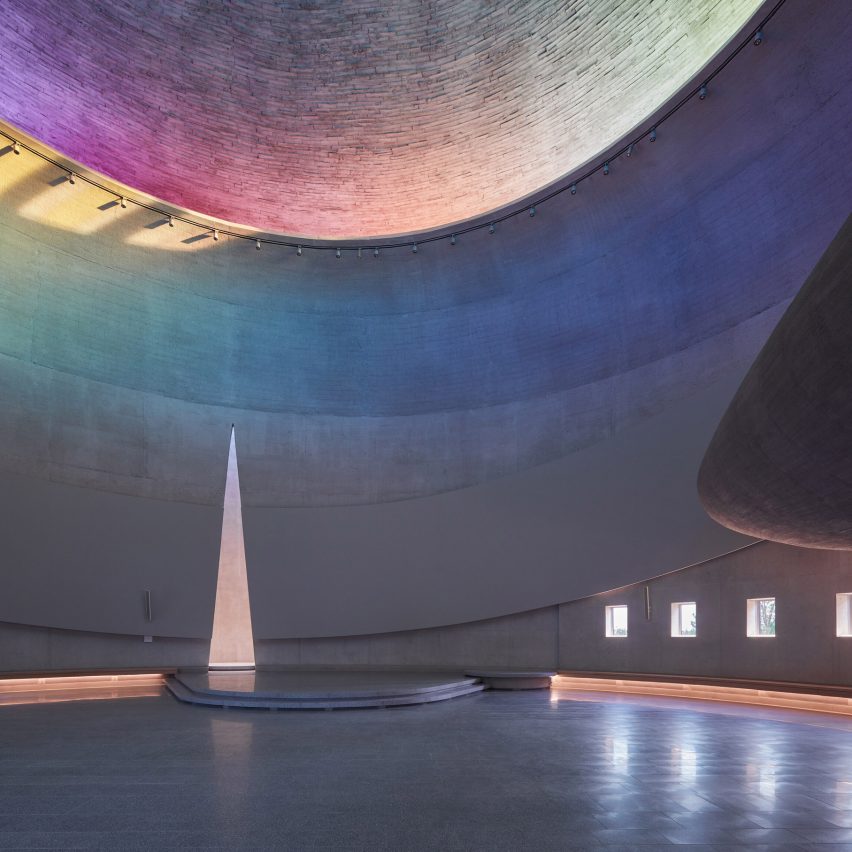 Czech Republic studio Atelier Štěpán has built a circular church in a housing estate in Brno that is topped with a panoramic, rainbow-hued window.

Dedicated to nurse Maria Restituta Kafka, who was born around 600 metres from where the building now stands, the Church of Beatified Restituta completes the Brno-Lesná housing estate that was designed by Czech architects František Zounek and Viktor Rudiš in the 1960s.

The circular church and its adjoining triangular tower were built alongside an existing spiritual centre designed by Zdeněk Bureš.

Atelier Štěpán designed the concrete church to be a place of contemplation away from the bustle of modern life.

The church’s walls have been left bare with the only decoration being the light that comes through an 80-metre-long, rainbow-coloured stained-glass window that wraps around the top of the concrete drum.

Light coming through these windows illuminates the concrete dome with various patterns depending on the time of day.

“In the baroque period, the church interior was completely covered with religious depictions,” said Štěpán. “It served as a kind of comic book because the visitors were not able to read, so the life of Jesus and of the saints and the stories of the Old Testament were depicted in the church in various forms.”

“Today, the situation is reversed,” he continued. “We live in the world full of easily accessible information, of visual and other sensations attacking us on every front, so the church should serve as a space for contemplation – a space stripped of superfluous visual, and other, sensations.”

Aside from a small stage with a triangular-shaped door leading into the sacristy and a series of small square windows, the main auditorium is only broken up by the entrance and a staircase that provides access to two balconies on the first floor.

These curved-concrete balconies provide seating for the choir and additional seating for worshipers.

Atelier Štěpán chose a circular form for the church as the shape stands as a religious symbol of heaven and eternity. According to the architect, the concrete dome above the ring of windows represents heaven above the city.

Within the auditorium, it is not possible to see the windows at the top of the building, as the architect wanted to create a sense of the unknown within the building.

“There surely are matters that transcend us and that are veiled because they lie on or beyond the very limits of our human perception,” said Štěpán.

“If there is any way to interpret them architectonically, I attempted that in the form of the Lesná church dome,” he continued.

Alongside the church, the concrete triangular bell tower also acts as a viewpoint across the city of Brno.

From the tower, a bridge connected to the church leads to a gallery above the main auditorium alongside the stained-glass windows.

Brno-based Atelier Štěpán was founded in 1994 by Marek and Vanda Štěpán. The studio previously built a cylindrical church in the village of Sazovice, which was based on the circular Romanesque churches built in the 10th century.