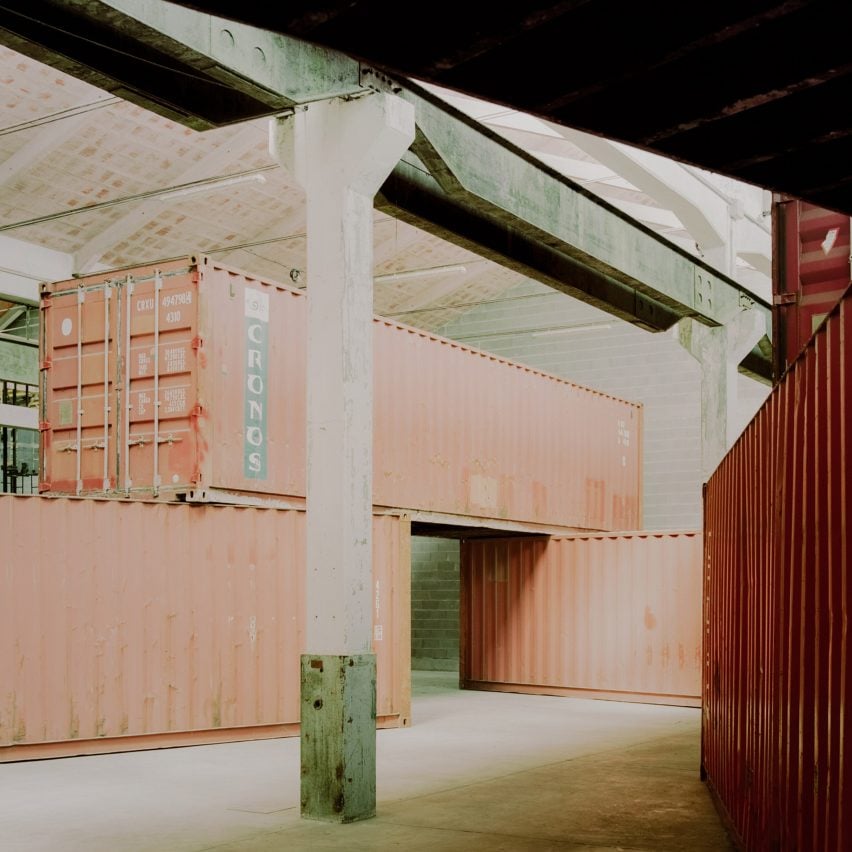 Venice architecture studio AMAA has installed eight shipping containers in an Italian factory as a permanent installation that aims to investigate what architecture is.

Named Space Within A Space, the permanent installation was designed without a specific use in mind, although the studio envisions events taking place in the building in the future.

“At this time, we haven’t strictly planned what the end use of the space is going to be, as possibilities are left open to new forms of colonization,” said AMAA architect Marcello Galiotto.

“We have designed a collective space with the aim of cultivating social value; a place that can be occupied by either private or public activities, a space that can host art exhibitions, art performances and festivals,” he told Dezeen.

By installing the eight shipping containers in the empty former industrial building, the studio aimed to demonstrate how the feeling of space can be changed.

“We had the chance to study and experience how space can change, how it can be modified by an act of appropriation, and we interpreted the former industrial building as a cave,” said Galiotto.

“An abandoned space can change appearance and become multiple things by using a standard module not related to the human being.”

AMAA created a series of physical models to explore how to push the structural capacity of the boxes to the limit and placed them accordingly. The eight containers are arranged in a loop, with four on the floor and four stacked above.

According to the studio, this stacking creates tension within the space.

“The architectural concern is how these modules – due to their arrangement – generate tension, transforming the space in an experience, and not a mere functional solution,” explained AMAA architect Alessandra Rampazzo.

Although Space within a space may be used for performances or other activities in the future, AMAA does not believe that shipping containers are appropriate modules for creating buildings.

“Containers have been interpreted as units to be inhabited,” said Rampazzo. “We think that their role is in some way abused, as these spaces are not meant to be lived in,” she continued.

“In our project containers are used in order to change space; they are volumes that originate a new space, which is the one to be experienced.”

AMAA treated the installation as a learning and research exercise to investigate what architecture is.

“We learnt that there are no limits in architecture,” said Rampazzo.

“Each space can change by small actions. And small doesn’t mean simple: the design of Space within a space required a comprehensive process of study of volumes, research and making of physical models.”

Shipping containers are increasingly being used by architects to create housing and other buildings. Recently British architecture studio AHMM unveiled a shipping-container housing development in Oklahoma, while design studio Doone Silver Kerr used the modular structures to create a hotel and wine bar in London.

Earlier this year the author of Container Atlas highlighted the top shipping container architecture in the world for Dezeen.

Photography is by Simone Bossi.

The post AMAA stacks shipping containers in Italian factory to create Space within a space appeared first on Dezeen.