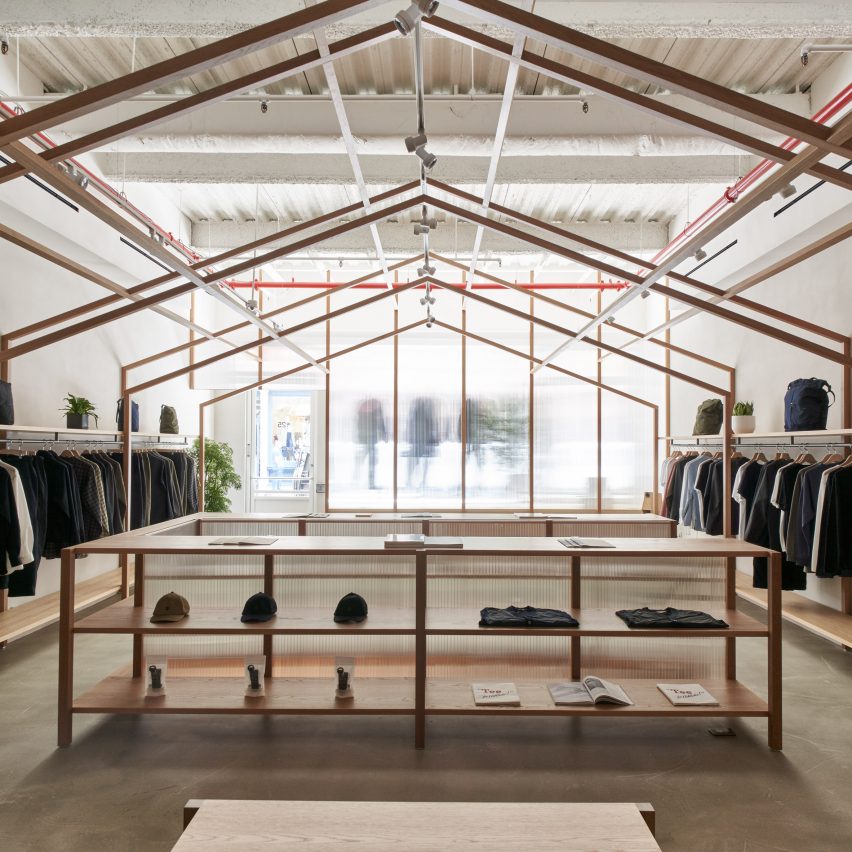 Woodwork form the frame of a gabled house inside this clothing store in New York designed by Japanese architect Taichi Kuma.

Marking its second outpost following another in Tokyo, the store was designed to draw on the brand’s Nanamica, which means house of seven seas. Working with the brand founder, Eiichiro Hommam, Kuma developed the interior design to take cues from a Japanese beach house.

The aim is to express “the free and relaxed feeling of the seaside, but with a distinctly Japanese aesthetic sensibility meaning the true highlight is the nanamica products”, according to the brand.

A key part of this is a series of gabled structures made from light oak that are intended to outline a house. The frame is slightly smaller that the store to leave space on the outside for shelving for handbags and plants, and clothing rails built on the walls made out of matching wood.

Wooden shelving for clothing and benches for customers to relax are also arranged inside the house-like structure. The free-standing shelving is backed by a translucent, recycled corrugated plastic matching the wall of the material at the front of the store and the rear, where it shields changing rooms placed behind.

Two large mirrors are placed on columns that protrude into the space creating the illusion of more room. White spotlighting is arranged along the top of the gable running down the middle of the space.

Kuma and Hommam stripped back the initial space to create Nanamica New York, creating a bare backdrop for the simple intervention. Walls and ceiling beams are painted white, while the floor is polished concrete.

Other recently completed stores in New York City include ONS Clothing store, which features a stage with a green curtain for hosting events, and Los Angeles clothing brand Lunya’s space in Nolita, which takes cues from “upscale New York” apartments.