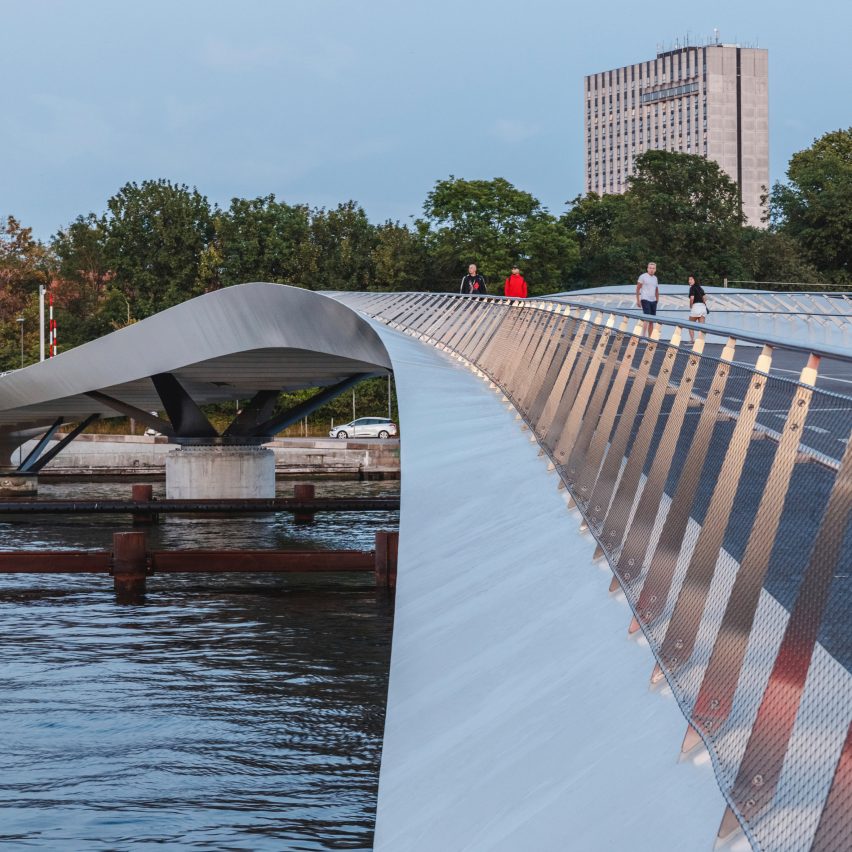 London architecture studio WilkinsonEyre has designed the Lille Langebro bicycle bridge as a convenient route across Copenhagen‘s inner harbour for cyclists and pedestrians.

The steel bridge, which can open to admit boats, was commissioned by Danish charity organisation Realdania and sits next to its OMA-designed Blox arts centre project.

WilkinsonEyre designed Lille Langebro to have a clean, sculptural shape.

“We felt that clean lines as opposed to more normal articulated trussed structures would be appropriate in the Copenhagen context,” WilkinsonEyre co-founder and director Jim Eyre told Dezeen.

“We therefore set out to design a bridge that in its normal day to day use would read as a simple elegant form stretching across the water,” Eyre said.

Its slight curve was informed by the way that the street and the old ramparts of the Christianshavn neighbourhood curve away on the far side of the harbour, and draws attention to the historical layout of the city.

“This plan curve then combines with a twisting of the surfaces of the edge beams that support the bridge, so that they rise from below the deck at each abutment to above the deck mid-span,” Eyre said.

“The outer extremities of these beams are pointed and blade-like, so that a line tends to divide light from shadow, accentuating the slenderness and seeking to define a graceful line and interplay of surfaces.”

While the inner harbour is mainly used by leisure craft and ferries that do not require the bridge to open, the central part of the bridge needed to be able to open up for larger vessels.

Like its design for the Gateshead Millennium Bridge, WilkinsonEyre aimed to create a bridge that “reveals its own secret as it opens,” Eyre explained.

“From an architectural point the bridge breaks new ground in that in its closed position it barely reads as an opening bridge, so that its second function is not immediately apparent,” he said.

“The central connection, where the two opening parts of the bridge meet, has an innovative bearing design which locks the two parts together in a way that resists bending to maintain stiffness across the joint,” Eyre added.

Lille Langebro is used by both cyclists and pedestrians and was designed to gradually draw attention to its surroundings.

“The plan and vertical curvature mean that users do not at first see their destination and their view changes as they pass along the bridge, for instance gradually bringing the eye onto axis of Vester Volgade when heading towards the City centre,” Eyre said.

The studio recognised that the bridge’s location in the harbour and the fact that it leads to Blox would make it a popular destination and took this into consideration when creating it.

Lille Langebro is shortlisted for the infrastructure project of the year at Dezeen Awards 2020. The winner will be announced in November.

Photography is by Rasmus Hjortshøj – COAST.