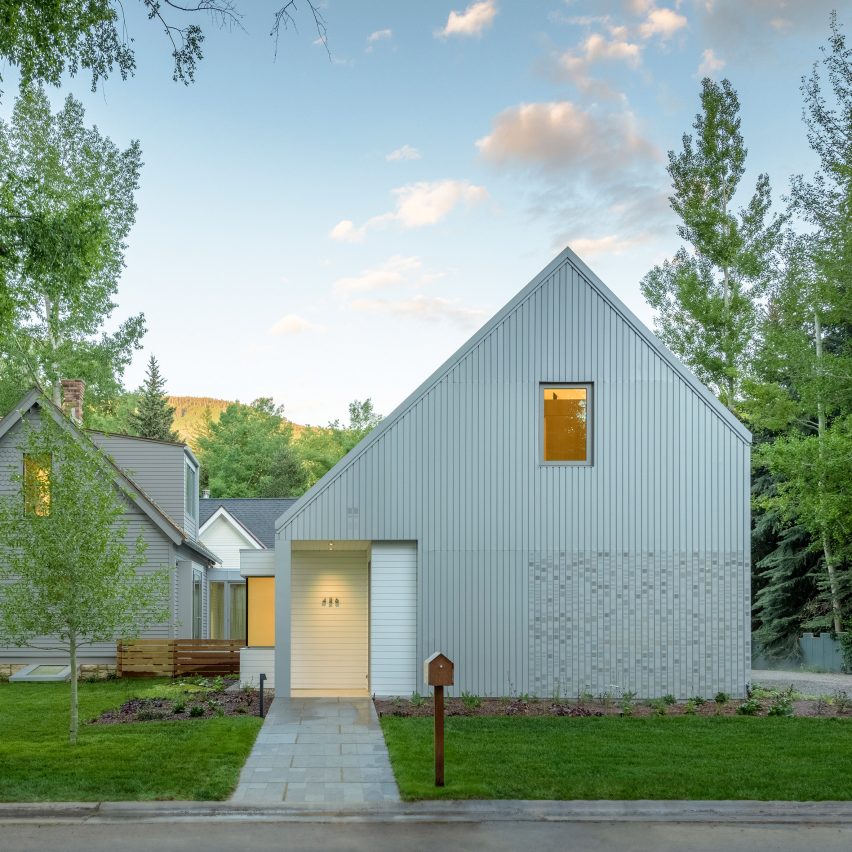 American practice CCY Architects has renovated and extended a house dating from the 1880s in Aspen, Colorado, adding a music room with a piano-themed perforated metal facade.

Cutouts in the facade are arranged to trace out the notes of Nocturne in E-Flat Major, Op 9, No 2 by famous Romantic-era composer Frédéric Chopin.

The project involved extensive restoration work as the original Victorian home had been damaged by fire and left empty for 10 years.

The separate gabled extension, called Music Box, holds a guest house that doubles as a place to hold piano recitals.

Doors open out on to the patio between the annexe and the main house so the residents can hold outdoor performances with views of the mountains.

“The clients purchased an 1880s Victorian residence in Aspen’s West End because of its proximity to the Benedict Music Tent and their affinity for historical architecture,” explained CCY Architects.

“Both husband and wife are interested in classical architecture, design, and the arts; the wife is particularly passionate about music, especially classical piano.”

The perforated metal facade allows light to filter in on three sides of the music room while screening less attractive views of the alleyway.

“This skin was inspired by one of the client’s favourite piece of music,” said CCY Architects.

“It stands off the structure through a batten system that leaves the perforated melody uninterrupted. The skin allows light to pass through, but it maintains privacy for those inside.”

To create the musical mural, CCY Architects took Chopin’s composition and transposed it onto metal.

“Using the same logic that informs a player piano to play music, each note, chord and the duration in which each are played were assigned a variable, in this case, the hole size and number of holes in a group,” said the studio.

“The hole size indicates the pitch and the number of holes correlate to the duration the note is played for.”

The material used in the facade is Galvalume, a thin sheet of steel with a protective coating of aluminium and zinc.

A perforated steel staircase allows the patterns of light formed from the facade to be visible from all three angles in the stairwell.

CCY Architects were careful to keep the proportions of the Music Box similar to those of the main house, to preserve its 19th-century heritage.

A 1970s addition to the house was demolished. The original structure was briefly lifted up to make new foundations and a basement before being placed back down exactly where it was before.

All of the house’s original materials were left in place, including the beams that were scorched by a chimney fire, and sliding sash windows were carefully restored.

A new staircase was built out of metal mesh but in winder-style form of the house’s old stairs.

“It pays homage to original stair design, and connects the Victorian’s three levels, while its materiality gives a nod to the Music Box’s contemporary design with the use of the same steel and perforated metal,” said CCY Architects.

The studio, which is based in Aspen, was founded in 1971 by  John Cottle, Rich Carr and Larry Yaw. Previous projects include a timber-clad house in the Rocky Mountains and a house inspired by a Norwegian cabin.

Photography is by Draper White and Lena Nicholson.