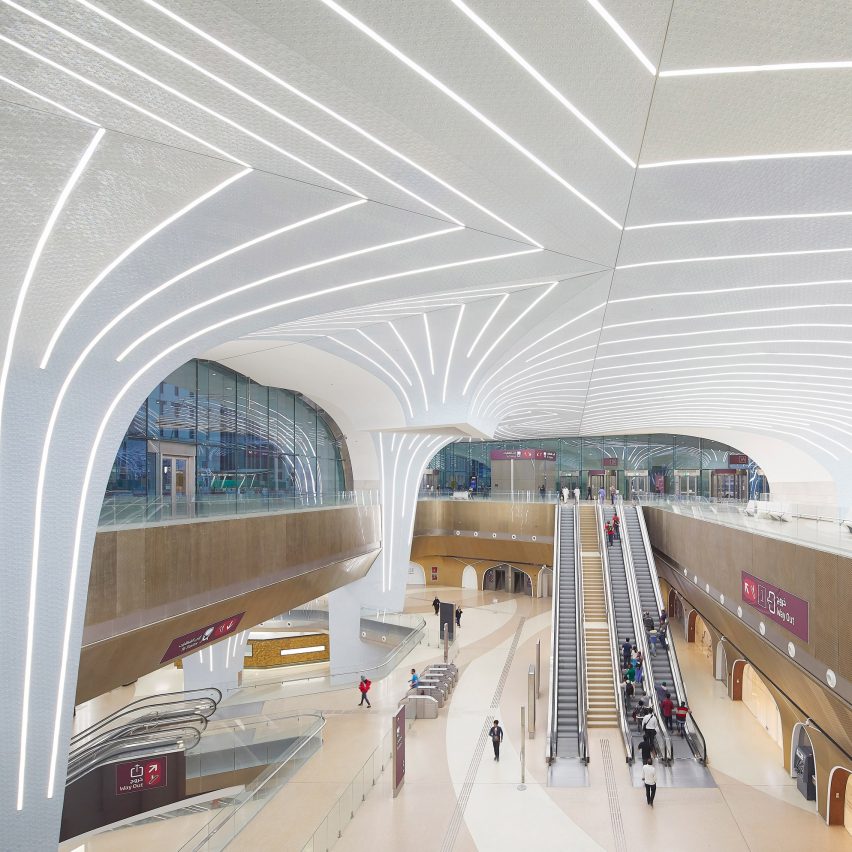 Dutch architecture practice UNStudio has collaborated with the Qatar Rail Architecture Department to create 37 stations for the driverless Doha Metro system, which has opened in Qatar.

Consisting of three lines that radiate out from the Msheireb station in the downtown area of Qatar’s capital city, the stations on the driverless metro system are united by a design language created by UNStudio and the Qatar Rail Architecture Department.

Aiming to be modern, but reflect the city’s history, the stations are all designed to be vaulted spaces.

“It was important that the design represent both modernisation and preservation,” UNStudio told Dezeen.

“The challenge was to reference local, traditional architectural heritage, while reinterpreting this into a contemporary design language that represents Qatar today,” it continued.

“The vault was chosen as this referential bridge between past and present.”

Each of the stations was built from parametrically designed, curved modular elements that can be assembled on a triangular grid so that the structure could be adapted for each station’s location, size and capacity.

UNStudio and Qatar Rail Architecture Department outlined the form and arrangement of these modular elements, along with numerous details including interior finishes, layouts, wayfinding and furniture, in an extensive design manual that was then used by the contractors to ensure a consistent design language was maintained across all 37 stations.

“Through the production of a design manual and with the use of adaptive parametric design, it has been possible to create a design with many variants, yet one which maintains a coherent identity throughout all of the stations,” said UNStudio founder Ben van Berkel.

“In this way, we can combine local contextual differences within an overall identity and parametrically adapt physical factors such as wayfinding, daylight penetration, passenger flows and constructive elements in a complex but extremely disciplined system.”

The modular system was used to create large, open entrance halls for the stations, which was part of the architects’ strategy to create welcoming spaces that celebrate public transport.

“The celebration of arriving and departing has always been found in the design of stations,” said Van Berkel.

“For the Doha Metro network we devised an adaptive parametric system which creates open, light and welcoming interiors for each of the individual stations. Traditional Qatari architectural features are reinterpreted to incorporate new, transformative qualities which capture daylight and direct this into the interiors, creating uplifting and luminous atmospheres.”

Hexagon-shaped tiles that give a multi-coloured mother of pearl-effect were used to clad the structural arched elements to make them distinct from the other surfaces that are clad in more modest materials.

Throughout the network the interiors were slightly adapted to differentiate the three lines in the system, as well as the fourth line that is currently under construction.

“Whilst the structural elements ensure the overall consistency of the network, the system also enables variety, as this is also necessary for the branding of the individual lines and the identity of the individual stations.” said UNStudio.

“The identities of the different metro lines are achieved by varying the materials, colours and details, while the station identities focus on different content that relates to their specific locations.”

Externally the parametrically-designed arched forms create distinctive structures that will allow travellers to easily identify and find the stations.

“These were roadside inns along ancient trade routes, where travelers, or ‘caravaners’, stopped off along their journeys,” said UNStudio.

“The Doha Metro stations were designed to reference this idea of creating a place, rather than merely a highly efficient node.”

“We are going to move differently in the future,” added Van Berkel.

“Mobility is changing fast, from the introduction of autonomous vehicles to urban cable cars and the Hyperloop. The mobility hubs of the future have to respond to and cater to these changes,” he continued.

“In order to encourage the use of more sustainable forms of transport, these stations not only have to ensure smooth passenger flows, but they need to truly appeal to the public; to be places they want to visit and return to.”

The Doha Metro system has been built ahead of the FIFA 2022 World Cup in Qatar.

Many of the stations will be used by spectators during the tournament including the Lusail station next to Lusail Stadium, which is being designed by Foster + Partners and Education City station, which is close to the Fenwick-Iribarren Architects and Pattern Design’s Education City Stadium.

Photography is by Hufton and Crow.