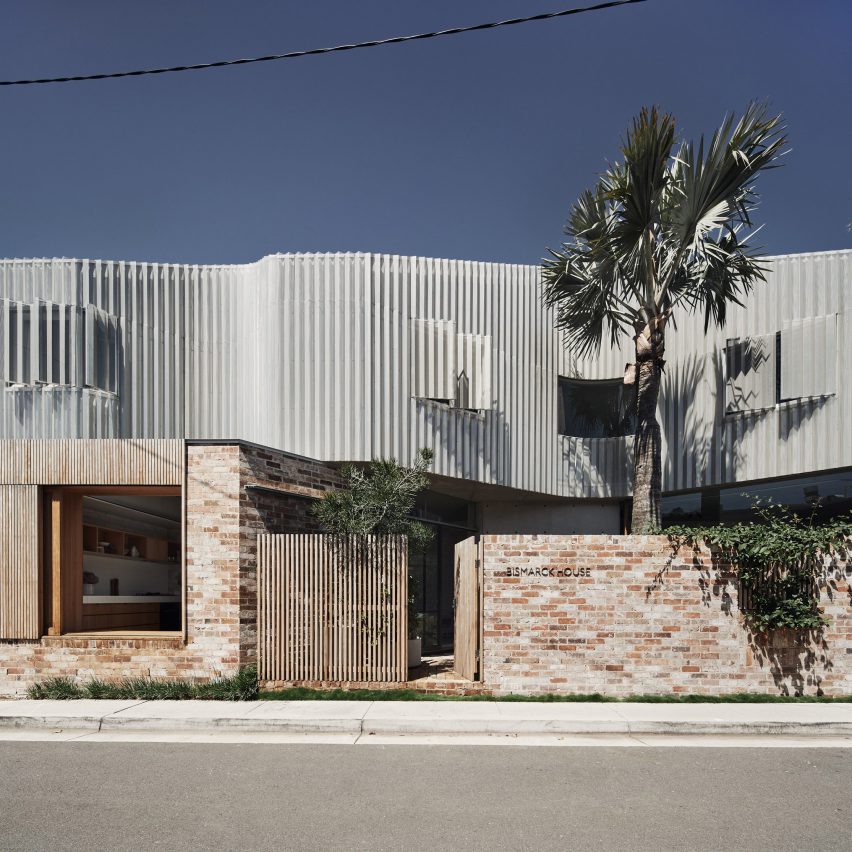 Andrew Burges Architects created Bismarck House holiday home in the Sydney suburb of Bondi to showcase the work of its landscape architect client.

The house, which has been shortlisted in the house interior, residential rebirth, and urban house categories for the Dezeen Awards 2020, was designed for Will Dangar of landscape practice Dangar Barin Smith to be noticeably different from the sounding residential neighbourhood.

“The idea was that the house would function primarily as a site for holiday rentals, while also demonstrating the capacity of our client’s construction and landscape design companies.”

The site is located on a lane that serves shops and cafes on the Bondi Road leading to Bondi Beach, and held a single-storey building that didn’t take full advantage of the sun and air.

Andrew Burges Architects kept the front room and porch of the existing house and worked within the envelope of that space, but the rest of the original building was demolished with the bricks cleaned and reused for the new, two-storey construction.

“We were interested in the laneway for its potential for social interaction between the house and lane, and the grittiness, and also the opportunity, given the client makes gardens, to create a footprint that extended the presence of the garden along the length of the laneway,” said Burges.

The studio worked with the idea of a “continuous garden” as a way of organising and maximising the space, and to place the garden at the heart of the scheme.

In order to create a fluid relationship between the inside and outside, the studio considered both the garden and the building itself as the ground floor of the house.

“Our starting point was to think of the site boundary of the house as the ground level house enclosure,” said Burges.

“Glazing and walls form moments within the site boundary that also happen to make thermal and rain enclosures, but these alignments have not been considered as the house perimeter – the site is the perimeter,” he added.

This concept influenced the materials for the ground floor, which were chosen to reinforce a robust outdoor character.

The downstairs rooms open up towards the garden and the laneway, while a succulent garden was elevated to protect the rear bedroom on the top floor from the low westerly sun.

“The site was chosen for its north-east aspect and the potential for borrowing light along the northern laneway,” Burges explained.

“The building footprint is intentionally restrained in size – to allow garden and light to fold between the lines of enclosure.”

While the materials used on the ground floor were chosen for their natural, raw qualities, the upper level, which houses three bedrooms, was designed to be lighter but more monolithic.

“The exterior is defined by a screen in perforated aluminium sheet – a standard perforated sheet ordered off the shelf in mill finish aluminium,” said Burges.

“The sheet was pleated so that the pleat dimension lands on every second rise of the corrugated sheet walling that provides enclosure beneath the screen,”

The undulating shape of the top floor helps let light into the garden below, as well as into the kitchen through a skylight.

The curved wall also means the bedrooms benefit from windows that don’t look directly out onto the buildings across the laneway.

Upstairs, the interior is dominated by proyalbi, a fine-set-plaster that has been applied to the walls and ceilings.

Hardwearing concrete floors and galvanised steel handrails were used for the upper level, continuing the theme of combining function and beauty.

Photography is by Peter Bennetts unless stated otherwise.