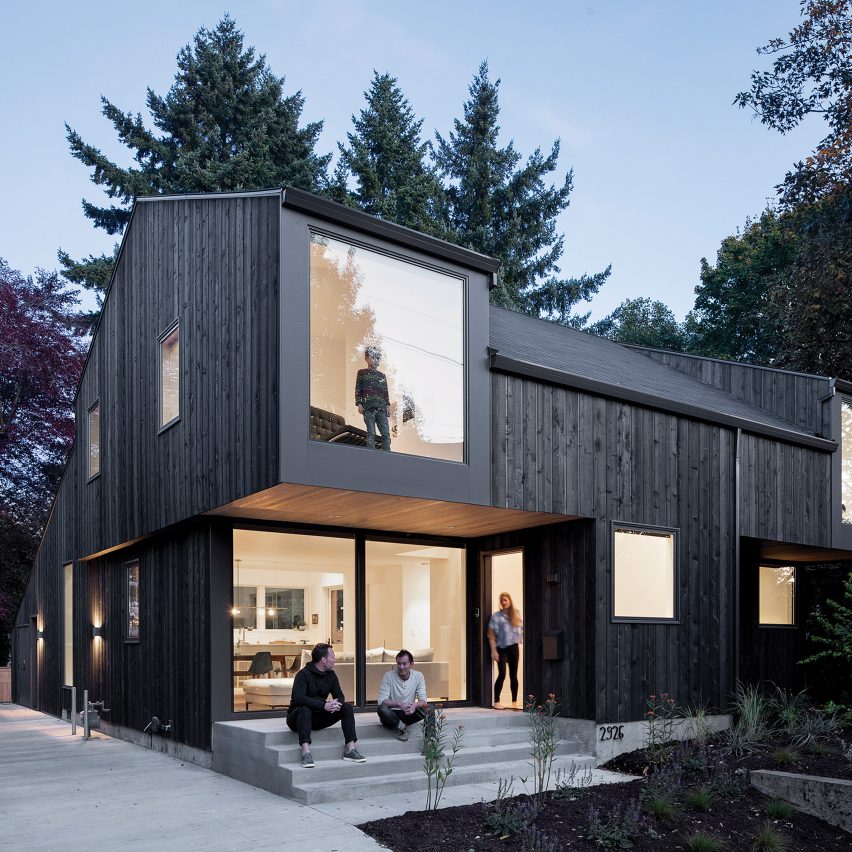 A cantilevered upper storey with symmetrical, glazed dormers is the focal point of House on 36th, which Beebe Skidmore has completed for a young family relocating to Portland, USA.

The sculptural dwelling overhauls an existing one-story cottage on the site that was built in 1945 but required a contemporary update and more space to meet the needs of the family.

Beebe Skidmore‘s design involved introducing an upper storey and brighter living spaces to the house but focused primarily on developing a new “unexpected” exterior that challenged the aesthetic of typical family homes in the area.

“We approach every project with the intention of making an unexpected, dynamic, and endearing shape that catches the eye of passersby and is delightful to live in overtime,” explained studio architect Nong Vinitchaikul Rath.

“We also wanted to challenge the traditional way in which single-family houses present a centralized composition, often with a projecting porch or front door being the focal point,” she told Dezeen.

House on 36th retains the original cottage’s concrete basement and foundations, as well as parts of its wood framing and plumbing.

The new cantilevered first floor, which overhangs the front of the house by 2.5 metres, was modelled on the North American garrison – a type of house with a slightly overhanging first floor.

This added more living space to the house without encroaching on the garden, and it also breaks up its building’s massing so that it does not appear out of scale in comparison to the neighbouring dwellings.

The blackened wood cladding for the house was chosen by Beebe Skidmore to emphasise the home’s sculptural form, while also helping to unify the levels and metal window frames.

This wood was stained rather than painted so that its natural textures and patterns are still visible.

“We created a material palette that puts the visual emphasis on the total form as one cohesive object rather drawing attention to individual details and elements,” explained Rath.

“The dark exterior colour also makes the voids formed by the big windows visually pop, especially in the evening and at night.”

The house is entered from below one of the first-floor cantilevers, which creates a deep weather-protected porch area.

This opens out into the heart of the house, where there is a large open-plan living area and kitchen, which is visually connected to the street, garden and first floor via a sweeping staircase.

“[The client] is an avid cook so they wanted a really functional and generous kitchen that they could eat in and live in by themselves and with friends,” Rath said.

“When they were in the kitchen, they wanted it to feel socially connected to the rest of the house.”

The children’s bedrooms are located behind the two large wall dormers on the first floor, which are used as cosy reading nooks, while the master suite is tucked away downstairs.

The material palette for House on 36th is deliberately pared-back, with a white “gallery-like” aesthetic chosen by the client that contrasts with its exterior.

However, to enliven the minimalist finishes, Beebe Skidmore has punctured large windows throughout to maximise natural light and also frame changing views of the surrounding neighbourhood.

Other recent projects by Beebe Skidmore that feature large windows include the Lincoln Street Residence extension, which is fronted by a grid of glazing and sliding doors, and a dark green dwelling that takes cues from Arts and Crafts architecture.

Canadian studio Post Architecture recently added a protruding window box to a century-old brick house during a renovation of the property near downtown Toronto.

Photography is by Jeremy Bittermann.