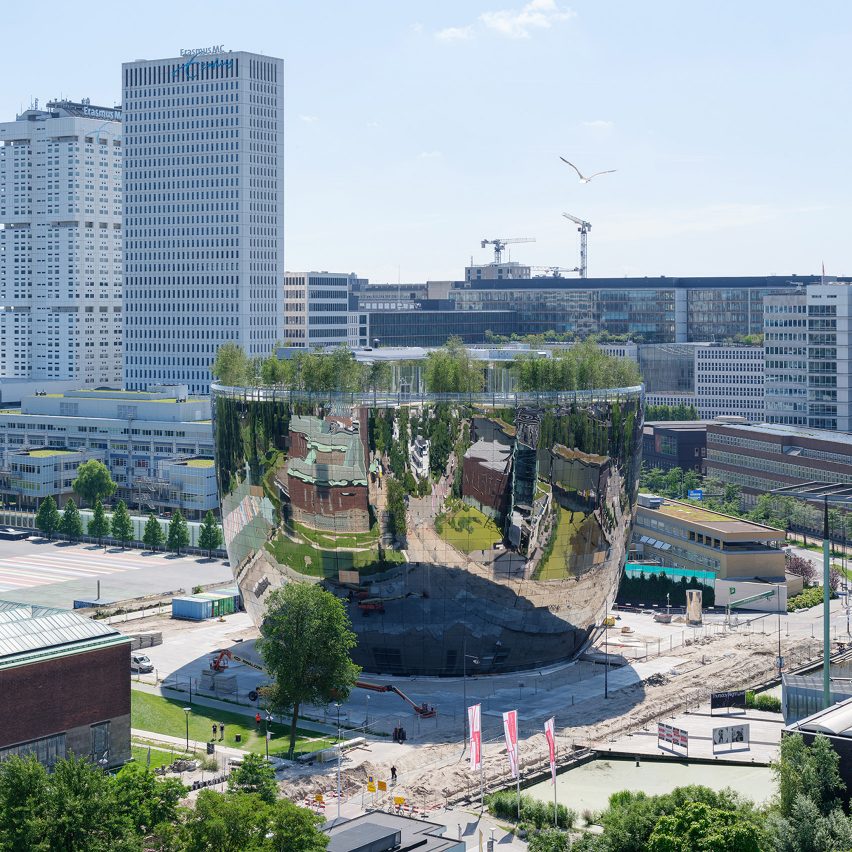 MVRDV has completed the bowl-like Depot Boijmans Van Beuningen in Rotterdam‘s Museumpark, which is covered in mirrored glass and topped by a “rooftop forest”.

The art storage facility, which will open to the public in autumn 2021, has been built to house the art collection of the Museum Boijmans Van Beuningen in one place for the first time since 1935.

Depot Boijmans Van Beuningen contains a mix of storage spaces alongside areas for art maintenance, both of which will be made accessible to visitors after the artwork has been moved there.

This makes the facility the “first publicly accessible art depot in the world”, according to MVRDV, and will offer a “new type of experience” for museum-goers in the Netherlands.

“With this construction completion, now the museum and the users can start to inhabit the building and fill its spaces with priceless art,” said Winy Maas, founding partner of MVRDV.

“Although it will take another year before the real opening, the completion is a special moment for all.”

To help reduce its visual impact, MVRDV clad the depot in 1,664 reflective glass panels so that it blends in with its surroundings in the OMA-designed Museumpark. Its bowl-shape was also developed to minimise its footprint.

“Its reflective facade wears the trappings of whatever surrounds it: people passing by, Museumpark’s leafy grounds, the clouds, and Rotterdam’s dynamic city skyline,” said MVRDV.

“Thanks to this reflection, the building is already fully integrated into its surroundings, despite its not insignificant size.”

Inside, the building contains several storage spaces alongside studios for the curators and areas for the maintenance of the art.

The storage spaces are divided into five different “climate zones” so that the artefacts can be stored and exhibited according to their specific temperature and humidity requirements, which can vary depending on the materials used to make them.

According to MVRDV, the focal point of the depot is its central atrium, which is filled with overlapping staircases and suspended glass display cases that will eventually be filled with art chosen by the museum’s curators.

This atrium will connect the storage and exhibition spaces to the curators’ studios, and offer visitors rare access and insights into how the museum cares and maintains its collection.

Once open to the public, the Museum Boijmans Van Beuningen’s artwork will be displayed throughout the entire building, including on its rooftop restaurant and sculpture garden.

This restaurant, aptly nicknamed the “rooftop forest”, is covered with 75 tall birch trees and was incorporated by the studio to make up for the lost green space and provide views across the city.

“Its success comes from the direct dialogue with all parties involved – from the person calculating the exact curvature of the mirroring panels and the construction worker who put up the glass vitrines to the company that co-designed our rooftop forest,” he said.

MVRDV is an architecture studio based in Rotterdam, which was founded by Maas, Jacob van Rijs and Nathalie de Vries in 1991.

It was developed by the studio with BAM Bouw en Techniek and will be made open to the public after its interiors are completed and the artwork has been moved inside.

Elsewhere, MVRDV recently converted a commercial building in its home city into a Morrocan-style courtyard house and it is developing an office within the shell of a disused factory in Shenzhen.

Photography is by Ossip van Duivenbode unless stated.