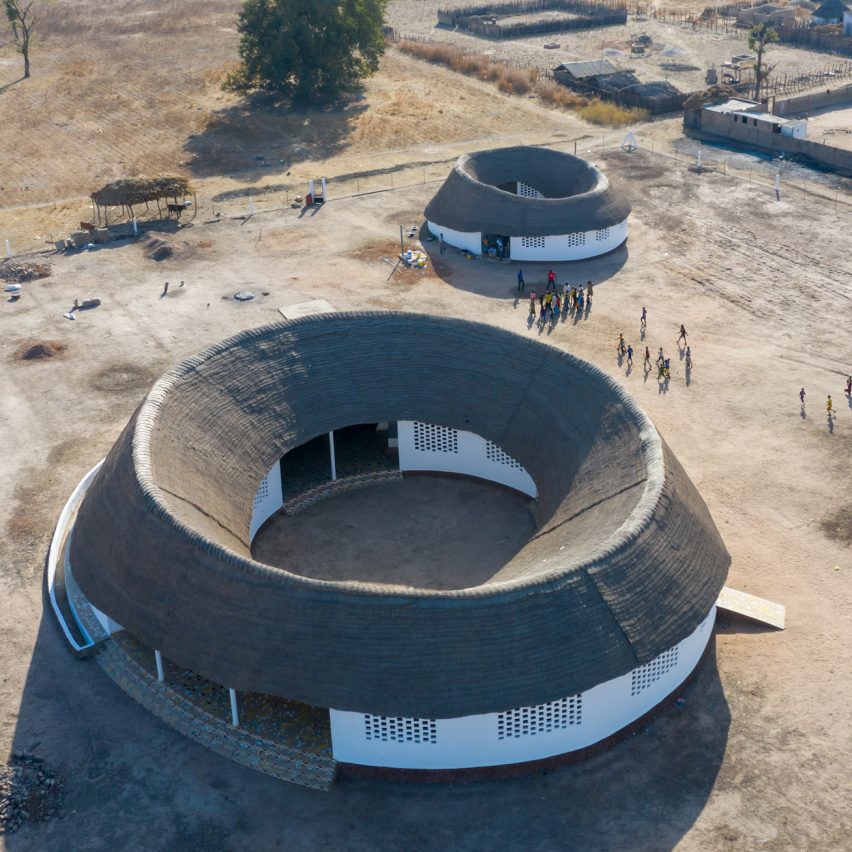 Japanese studio Toshiko Mori Architect has created a circular building topped with a thatch roof for the Fass School and Teachers Residence in the rural village of Fass in eastern Senegal.

Created in collaboration with the Josef and Anni Albers Foundation and Le Korsa not-for-profit organisations, the school was designed by Toshiko Mori Architect for 300 students aged from five to 10.

In total, there are four classrooms of different sizes and two open flexible spaces arranged in a circle around a central courtyard to give the school a variety of spaces for children of different ages.

“The circular shape provides for easy circulation of teachers between classrooms, while variation in the perimeter walls in terms of height and proximity to one another gives each classroom a unique spatial quality,” explained Toshiko Mori, founder of Toshiko Mori Architect.

“The inward orientation of the classrooms towards the central courtyard and the continuous roof reinforces the feeling of community fostered by a shared school setting, even across different age groups or class populations,” she told Dezeen.

Both the school and the neighbouring teacher’s residence have a distinctive circular shape that, along with being practical, references local housing.

The architecture studio hopes that this will make the school relatable, but also distinctive.

“The school’s circular design was informed by ancient impluvium family houses, a vernacular typology of the Senegalese region of Ziguinchor and Casamance, which similarly orient rooms in a circle around a central courtyard,” said Mori.

“The Fass School uses this vernacular geometry but applies it at a much larger scale, making a building that is at once familiar to residents as a place of familial and community gathering, yet strikingly iconic amongst the surrounding steppe landscape.”

The school was constructed from materials found near the site. Its walls are made from compressed-mud bricks from earth found on-site and the bamboo beams and thatch for the roof were grown nearby.

“We looked to the thatch roofs of the aforementioned impluvium houses as an improvement on the local government-mandated school typology, which uses corrugated metal roofs,” said Mori.

“These echo the sound of flash flood rains during the rainy season, which can make school lessons unable to be heard. Additionally, the metal roof transmits extreme heat during the summer months, making the classroom unusable,” she continued.

“In contrast, thatch, a locally-available material, dulls the sound of flash flood rains and insulates against heat during the hot summer months.”

Toshiko Mori Architect previously used similar materials – compressed earth, bamboo and thatch –  to build a community centre in the nearby village of Sinthian, which was also a collaboration with the Josef and Anni Albers Foundation and Le Korsa.

The school was built by contractor Magueye Ba, who recently built another school in eastern Senegal from the test facades created for a hospital that is being built in the city of Tambacounda.

Photography by Iwan Baan, except where stated.