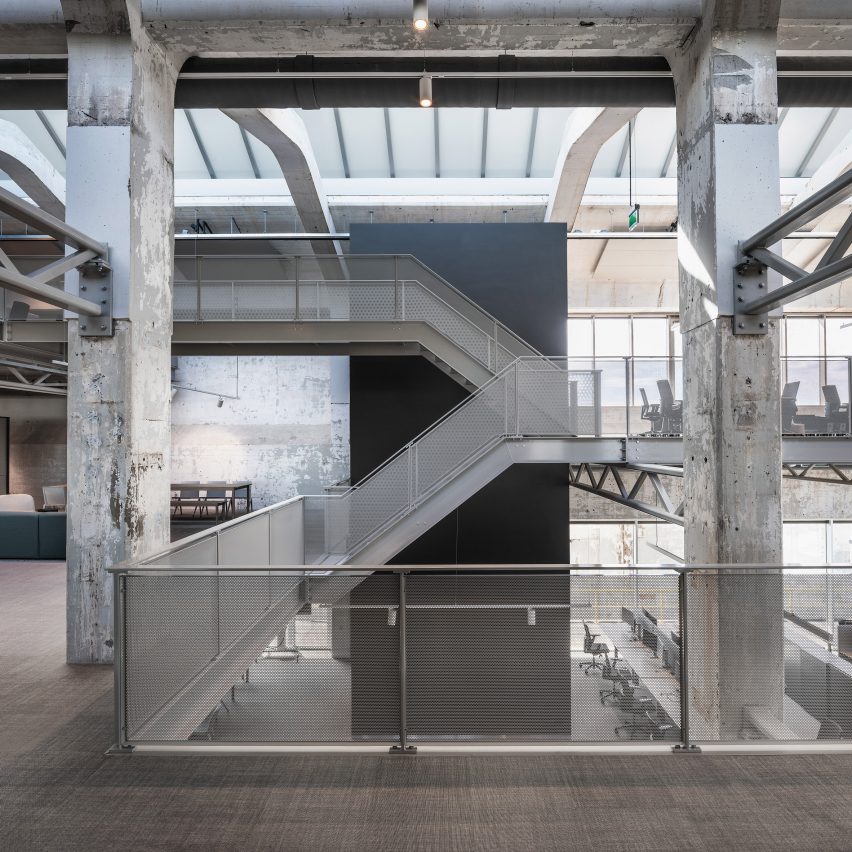 HofmanDujardin and Schipper Bosch have inserted a steel frame into the expansive production hall of an old nylon factory in Arnhem to create the KB Building offices.

The office is housed within one of several 1940s factories on a 90-hectare chemical-industry plant in the Netherlands, which local developer Schipper Bosch is transforming into a campus for clean energy companies.

HofmanDujardin and Schipper Bosch’s goal for the concrete nylon factory was to add extra floor space to its giant production hall while preserving its spacious and “great cathedral-like qualities”.

They achieved this by inserting a minimal and light-weight steel frame within the factory’s original concrete columns, which introduces three levels of office space.

“With its tall columns and high windows which flood the space in daylight, the empty space showed great cathedral-like qualities,” said Michiel Hofman, architect and founder of HofmanDujardin

“An additional asset was the textured greys of the existing concrete, which revealed an intrinsic beauty. All additions are designed to retain these qualities and carefully build upon them,” he told Dezeen.

The former large production hall, which is now the main office space of the KB Building, is elevated on the building’s first floor.

Below is the factory’s ground floor and basement levels, which HofmanDujardin describes as having “a much heavier character” because they have lower ceilings and less natural light.

As part of the project, HofmanDujardin and Schipper Bosch transformed these lower levels into a reception area, a restaurant and meeting rooms with a bleacher-style staircase for presentations.

They are connected to the main office space via a wide wooden staircase that runs from the ground floor to the centre of the first floor.

This wooden staircase is visible throughout KB Building and was designed by the studios as a visual landmark to help visitors and employees orientate themselves in the space.

The steel staircases that connect the new upper levels hang above it, adjacent to an elevator that has been concealed within a tall black box.

The new floors in the main office space are arranged as a continuous loop around the central staircases, positioned on top of open-lattice girders that span the building’s existing concrete columns.

This was engineered to visually connect each level and also maximise natural light throughout, preserving the spacious feeling of the original production hall.

Steel was chosen for the new structure as it is a visually light-weight material that complements the existing concrete and it can also be easily adapted.

“The new floors are constructed as light as possible,” explained HofmanDujardin. “As a result, the design not only continues the visual spaciousness, it also allows the transformation to be adapted or even reverted in the future.”

The KB Building’s upper levels all cater to working alone or as part of a team, with lounge spaces and kitchenettes positioned closest to the central stairs and individual workstations concentrated around their edges.

There is also a space on the first floor that hosts private works spaces nestled within tall plants and greenery, nicknamed the “concentration jungle”.

The KB Building’s furniture has been chosen to support this layout and “carefully accommodate space for collaboration and places for concentration”.

However, the furnishings are unified by their neutral colours and materials, which have been selected by the studios to retain focus on the concrete shell.

The site of KB Building has been in the process of being transformed by Schipper Bosch since 2003. Once complete, it is hoped to encourage collaboration between large and small clean-energy companies in the Netherlands.

KB Building’s exterior will be renovated by developer Schipper Bosch to ensure each of the buildings on the campus, which is named Industriepark Kleefse Waard, complement each other.

Earlier this year, Venetian office AMAA converted an abandoned plumbing factory in Italy into an architecture studio, which also celebrates and preserves the building’s industrial aesthetic.

Other studios that have recently taken on adaptive reuse projects include MVRDV, which is currently in the process of converting a disused factory in Shenzhen into creative offices, and Clancy Moore Architects, which has converted a warehouse into a family home for a photographer.

Photography is by Matthijs van Roon and Peter Tijhuis.