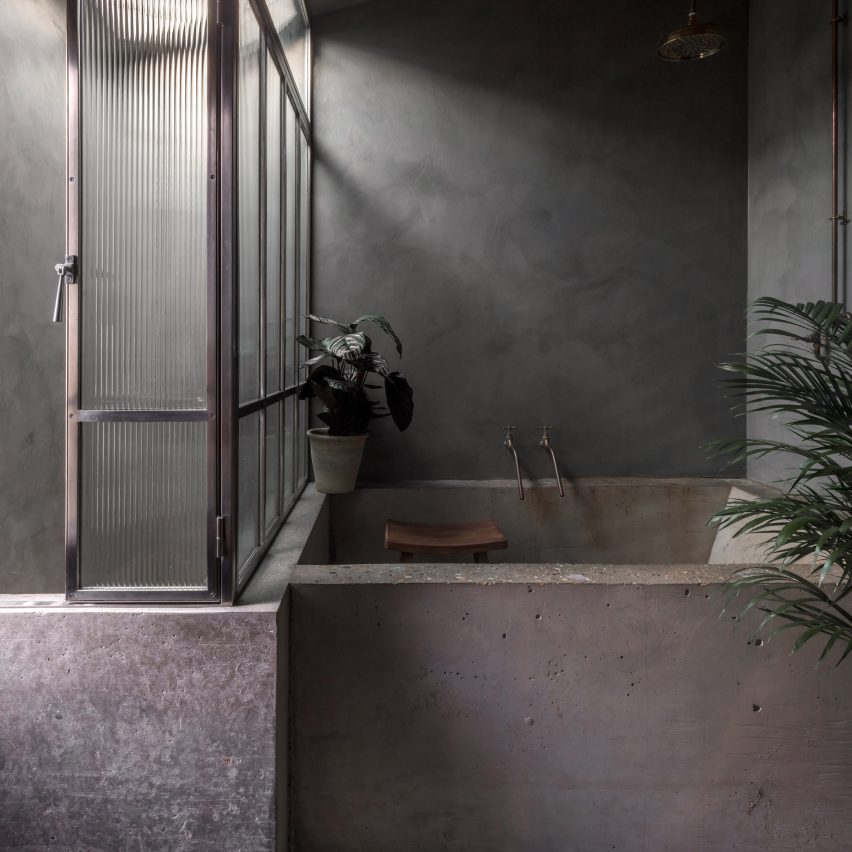 Untitled House is a residential extension and renovation in Camberwell, London, by architecture studio Szczepaniak Astridge that centres around a “concrete sculpture”.

The project was undertaken by Szczepaniak Astridge for a client called Rachel, who is the creative director of a major British fashion house.

Rachel asked Szczepaniak Astridge to create a home where she and her husband could relax and decompress after work.

“Untitled House has no name. Like a piece of art with no name,” said the studio.

“We wanted to introduce a concrete-walled void through from the kitchen up to the bathroom. This enables smells and sounds to travel up and down the house.”

Concrete poured in situ forms the foundations, floors, walls and ceilings of the ground-storey kitchen and a new bathroom on the first floor.

A double-height space has been left open above part of the kitchen, connecting it to the bathroom above.

The gap is ringed by a concrete half-wall topped by polished stainless steel Crittal windows created by specialist metalworkers.

These windows form a screen for a monolithic bathtub that sits, like another miniature void, on the other side. The deep and square tub is formed of the same dark concrete as the walls and floor.

These sculptural concrete elements are a reference to the work of Gordon Matta-Clark, the architect-trained artist who made dramatic cut-outs in buildings.

“The bathroom on the first floor was designed as a place to retreat to, to guiltlessly linger and hang out,” said the studio.

Rachel chose sinks made of dark polished stone to compliment the moody atmosphere of the room.

Downstairs, the kitchen is lit by light coming down through the void and by a long skylight cut into the timber-lined ceiling. A trough-style sink sits against a raw-concrete column.

Grey concrete boxes form benches under both sides of the windowsills between the kitchen and outdoor terrace.

On the exterior side, deep timber eaves shelter the seating area and the bi-folding doors that open out on to the patio.

“The design was conceived as a moving jewellery box,” said Szczepaniak Astridge.

“The facade opens up and closes and is protected by a large 0.5-metre overhang from the rain.”

During the renovation process for the original house, the studio peeled back layers of wallpaper from the walls.

They used these discoveries to inform the palette of colours for the redecoration, and saved sections of the stripped paper for a book they made for Rachel about the project.

Szczepaniak Astridge is a London studio founded by Simon Astridge and Nicholas Szczepaniak. A previous project from the practice featured a rooftop extension with a timber bathtub in front of a window.

Photography is by Nicholas Worley.