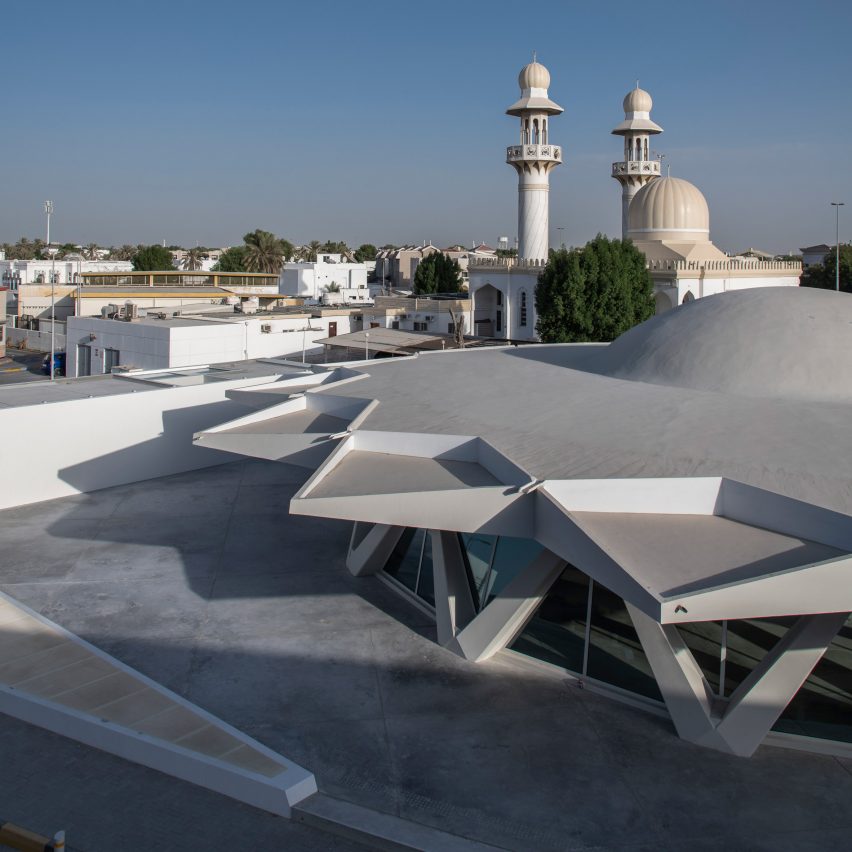 UAE-based SpaceContinuum Design Studio has collaborated with the Sharjah Art Foundation to turn a 1970s brutalist restaurant into an arts centre in Sharjah.

Originally opened in 1978 as a French restaurant and patisserie, the Flying Saucer has been renovated to become an exhibition venue for the Sharjah Art Foundation (SAF), which is a pertner of both the Sharjah Architecture Triennial and the art biennial.

The local landmark, which became a supermarket in the 1980s and then a chicken restaurant in the 2000s before being purchased by the SAF in 2012, has been stripped back to reveal its original unique silhouette.

An attached annexe was removed along with its grey and orange aluminium cladding to showcase the distinctive, 32-pointed concrete dome that is supported by triangulated, intersecting columns.

Internally, a false ceiling and partitions were removed to create one large space topped by the 7.3-metre high dome that will be used for major installations.

“We reversed the transformations undertaken during the Flying Saucer’s occupation by Al Taza restaurant that led to the erasure of the building’s Brutalist character,” explained SpaceContinuum Design Studio founder Mona El Mousfy.

“The core aim of the present restoration was to bring the Flying Saucer back to its original silhouette by removing its incongruous connected annex, reinstating its openness and perceptual lightness,” she told Dezeen.

“This deletion fully restores on the interior and exterior the radial symmetrical shape of the building, helping to further appreciate its quite magnificent roof and facade structures.”

To allow the Flying Saucer to stand alone, the majority of the art centre’s other functions have been placed underground in a large space that SAF named the Launch Pad.

This space occupies the majority of the site and is accessed by an open staircase within a public square, named the Platform, that was created alongside the venue on the former parking lot.

“The new underground venue dubbed the Launch Pad – keeping with the space theme – was conceived to complement the Flying Saucer both spatially and programmatically,” explained El Mousfy.

“In contrast with the Flying Saucer, the Launch Pad has a fluid spatial geometry that mirrors the new urban space dubbed the Platform; it fans around the Saucer’s faceted retaining walls and extends to the periphery of the site.”

This underground space, which is lit by three linear skylights along the edges of the site and a circular sunken courtyard, contains a cafe, library and several meeting rooms.

Its main, open space is designed to be used for exhibitions, workshops and film screenings, and is flanked with long tables that can be used as workspaces.

El Mousfy, who also acts as an architectural consultant for SAF, hopes that the venue will become a hub that attracts people from Sharjah and across the United Arab Emirates and will continue its architectural legacy.

“The venue’s iconic quality, expressing the optimism and forward-looking vision of the UAE genesis years, and its surprising adaptability and participation in the urban life and history of the surrounding neighbourhoods have contributed to its place in Sharjans’ collective cultural memory and place identity,” she said.

“With this in mind, Sharjah Art Foundation believed it was important to maintain the beloved Flying Saucer and to create through the present renovation vibrant urban and architectural spaces that support community gathering, learning and creativity with the aim to further inscribe the building and its urban fragment in the daily life of Sharjans.”

The Flying Saucer restaurant is one of many buildings from the 1970s and ’80s that are being restored by SAF. This includes the two main venues for last year’s Sharjah Architecture Triennial – the Al Jubail Vegetable Market and a school that has been refurbished by El Mousfy to become the triennials permanent headquarters.

SAF is also converting the 1970s Khor Fakkan cinema into a music school and a pyramidal-roof-topped kindergarten into a community centre.

“In the period following the UAE’s formation in 1971 many of the 70s and 80s buildings were public projects commissioned by the nascent state,” explained El Mousfy.

“They aimed at prioritising civic development, hence their historical importance and the need to preserve them. Some other buildings like the Flying Saucer continue to represent a clear expression of the futuristic vision of the seventies, a period when modernity was beginning to be embraced in the city,” she continued.

“The repurposing of these buildings preserves them while highlighting their architectural and urban qualities and revealing their rich history with multiple references to the UAE’s own history.”

Photography is by Danko Stjepanovic.