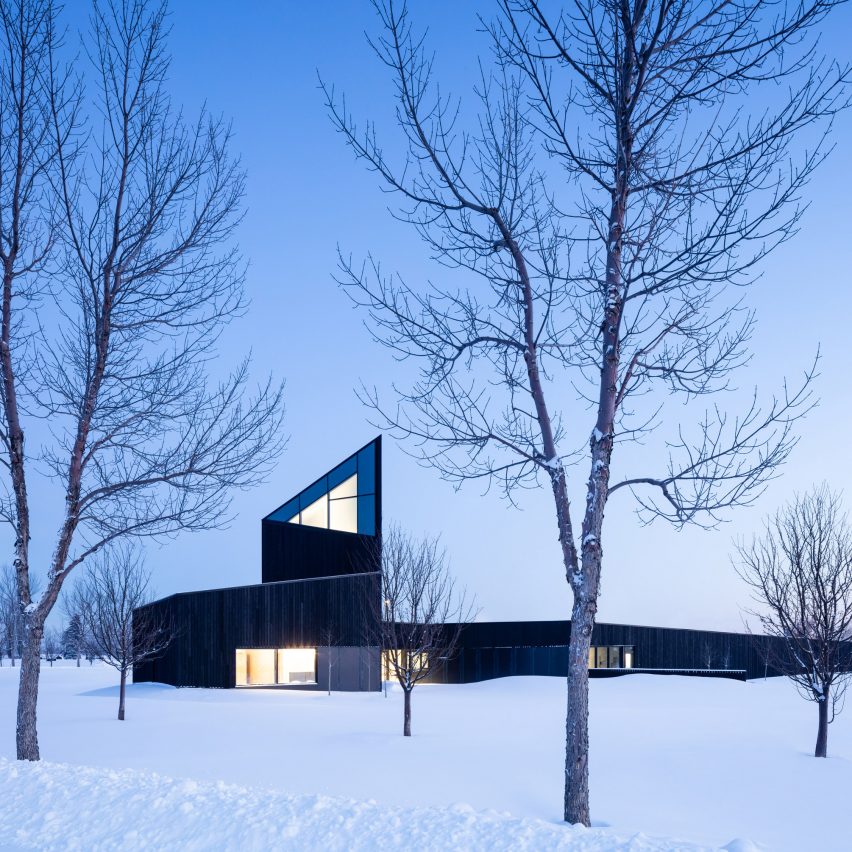 Vancouver-based Shape Architecture has unveiled the charred-wood South Haven Centre for Remembrance within a municipal cemetery on the outskirts of the city of Edmonton, Canada.

Built to serve a non-denominational cemetery, Shape Architecture aimed to create a building that was sensitive to its site and conveyed a sense of remembrance without making strong references to religion.

“Given the cemetery is non-denominational; the mandate was to create a building that would speak to everyone without any literal references or iconography,” said Shape Architecture partner Dwayne Smyth.

“This was one of the most challenging and also motivating drivers behind the evolution of the design as it pushed the design to be continually refined and edited,” he told Dezeen. “The result was a project that strives to be timeless and move everyone in some way.”

Partially submerged in the landscape, the 650-square-metre, single-storey building contains the cemetery’s public meeting rooms as well as its offices for maintenance staff and a large garage, which is hidden from the cemetery by a low wall.

These public and staff areas are positioned at either end of the building and divided by a large lobby and reception area that has a full-height window with views across the cemetery.

A 13-metre tall, angular tower, which stands above the public end of the almost entirely black building, marks its position in the cemetery and recalls the form of a gravestone.

At the top of the tower an angled, triangular-shaped window provides light to one of the family meeting rooms and a corridor.

“The building emerges from the prairie landscape and stands against the horizon like a grave marker in the field,” said Smyth.

“From the exterior, the tower acts as a marker in the landscape which is symbolically centralised within the cemetery itself,” he continued.

“Inside, the tower makes reference to the summer solstice and more specifically; how light enters the tower on that day from dawn to dusk.”

“The dark exterior provides high contrast in the winter and is seen as more of a silhouette on the horizon during the spring, summer and autumn,” explained Smyth.

“The ephemerality of the interplay of shadows on the snow contrast the permanence of the physical building itself; where remembrance is signified through the interplay of the architecture, nature and time.”

In contrast to the black exteriors, both the public and staff areas of the centre’s interiors are decorated with light materials.

Birch timber was used to clad some walls and to create in-built furniture, while the upper third of the walls and ceiling were painted white.

Other recently completed buildings in cemeteries include a pink pigmented concrete building by David Chipperfield’s studio in the Japanese town of Inagawa and a structure in an Italian cemetery made from local limestone stacked in metal baskets.

Photography is by Ema Peter.