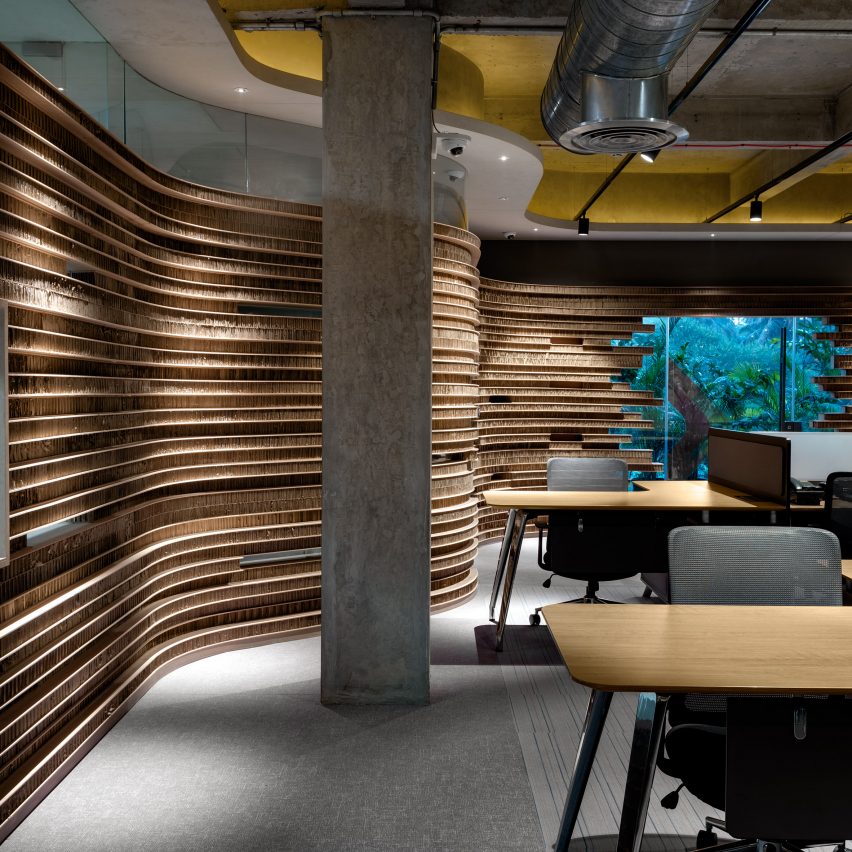 Architecture practice Studio VDGA has renovated an office in Pune, India, with partition walls made from cardboard and MDF.

Located in the Pimpri Chinchwad district, the four-storey office for 100 people has been given a recyclable fit-out.

Called Office in Cardboard, the project has been shortlisted for Dezeen Awards 2020 in the large workspace interior category.

“We devised an innovative concept to replace the solid partition walls with more functional and textured material,” said Studio VDGA.

“It also serves as a low-cost material since it does not require polishing or painting as it is kept raw.”

Studio VDGA’s paper-based design was made for an electric-components manufacturing company that is in the process of moving away from its previous work of making petrol and diesel vehicle components.

The cardboard’s recyclable properties are intended to symbolise this shift towards a more environmentally-friendly industry.

Sheets of honeycomb cardboard – a kind of paper packaging with an internal hexagon structure for strength – form divider walls, doors and a backdrop for the reception area.

“Honeycomb board was first introduced in the aeronautical industry in the form of aluminium honeycomb boards,” said Studio VDGA.

“In paper form, it is used extensively in Japan since being a lightweight material, it does not cause harm to life in the case of earthquakes,” added the studio. “IKEA is using it in abundance to create light modular furniture.”

In some areas, the cardboard elements wrap around the external walls and connect to form dividers between different zones of the office floors.

Curving elements formed from the cardboard make sections of wall that billow into the room or wrap around supporting columns.

Sections of the sheets’ exterior have been cut away to reveal the internal honeycomb in order to create an interesting texture.

“What interested us was the cross-section through the board rather than the material itself,” said the studio.

Cardboard absorbs sound, so the portion walls double as baffles to keep the background noise of the office low and grant employees more privacy.

Slim horizontal slots form windows to allow light through in some areas. An installation of plants and electrical components displayed in white paint tins left over from the refurbishment hangs from the ceiling.

Ceilings have been left open, with the air ducts visible, so as to create as much height as possible.

The reception area’s floor is tiled with different kinds of dark stone, and black metal railings bracket the stairs, with brass rings designed to look like an abacus.

Based in Pune, Studio VDGA was founded by husband and wife team Deepak and Varsha Guggar in 2004.

Cardboard was also the material of choice for this school office in Melbourne, a collection of colourful and corrugated furniture, and the entirety of this cafe in Mumbai.

Photography is by Hemant Patil.