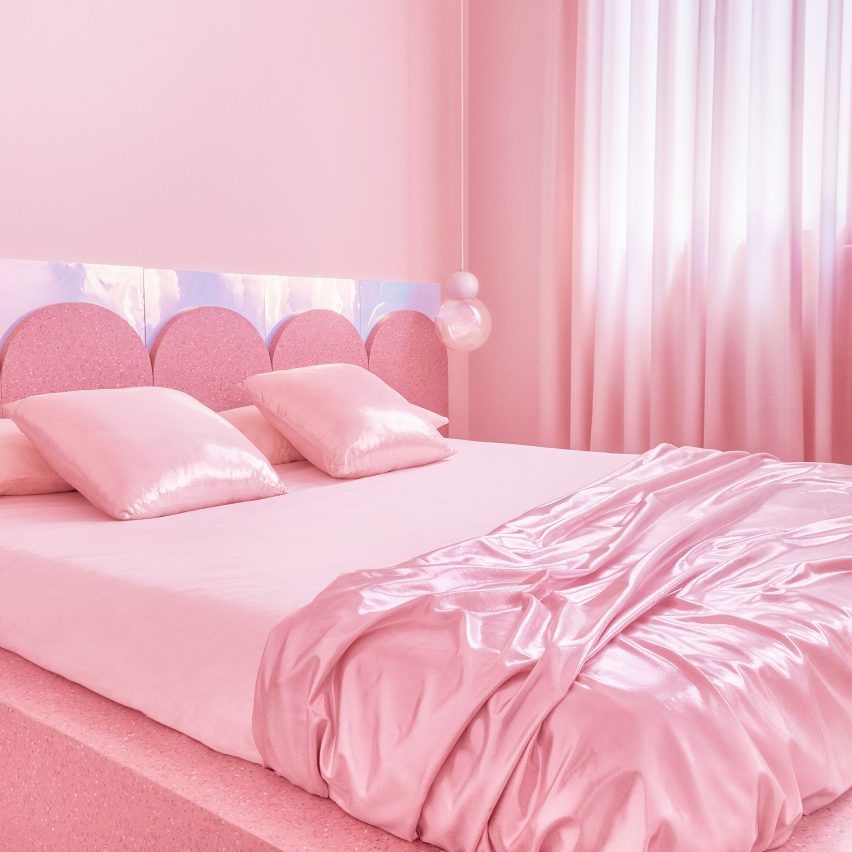 Patricia Bustos Studio channelled “aesthetic madness” to create the striking bright-pink interior of this rentable apartment at the heart of Madrid, Spain.

Locally-based Patricia Bustos Studio applied 12 different shades of pink throughout the Minimal Fantasy apartment, which is meant to offer a bolder take on the typical holiday rental.

“We wanted to do something eye-catching and not go unnoticed, since in Madrid the offer of vacation rentals is enormous and you have to differentiate yourself if you want to have a recurrence in the rentals,” the studio told Dezeen.

The 55-square-metre apartment is set inside a 1950s residential building that’s a stone’s throw away from Madrid’s lively Puerta del Sol square.

It formerly played host to just one bedroom and one bathroom, but Patricia Bustos Studio reconfigured the floor plan so that it can comfortably accommodate slightly larger groups of holiday goers.

There are now two bedrooms and an additional bathroom. The kitchen has also been separated from the living area so that, if necessary, it can sleep another two guests.

With structural changes out the way, the studio set about creating the apartment’s stand-out interior – which is almost exclusively pink.

“Except for the distribution, which had to be practical, the rest of the project has been an aesthetic madness to take the visitor out of their comfort zone and make them dream,” explained the studio.

“Pink is already the colour of a whole generation… the generation of the brave, those who are not afraid of change,” it continued.

“Pink vindicates the fall of stereotypes – everything is possible, nothing is planned or established and that’s the beauty of it. There are no rules, or rather that everyone has their own.”

In the living area, bubblegum-pink paint has been applied across the walls and ceiling. A flecked pink laminate covers the floor and a chunky L-shaped plinth that winds around the corner of the room, topped with plush pink sofa cushions.

Guests can gather for meals around the oval-shaped pink dining table, which is surrounded by dining chairs upholstered in metallic pink fabric with an iridescent finish.

The monochromatic colour scheme is interrupted in the adjacent kitchen, where the cabinets are covered in a mixture of blue, pink and gold geometric shapes.

These same tiles have been used to clad the side tables and supporting mattress base in one of the apartment’s bedrooms.

In the other bedroom, the mattress is pushed up against a scalloped pink headboard. Textural interest is added throughout by baby-pink lamé soft cushions and faux-fur throws.

Other than a few spherical pendant lights, trailing ivy plants and neon art piece, Patricia Bustos Studio hasn’t incorporated a lot of decoration in the apartment.

Some elements, like the stepped blocks which display books and other trinkets, are meant to riff off La Muralla Roja – a housing development designed by Spanish architect Ricardo Bofill in 1968, distinguished by its maze of interlocking stairways.

“[Bofill] creates a mysterious and infinite space with the perfect transformation between 2D and 3D, and with several elements that play with the optical illusion,” added the studio.

Several other architects and designers haven’t shied away from making extensive use of the colour pink – last year, Child Studio covered the interior of a vegan pizza restaurant in London with candy-pink Formica.

Mar Plus Ask also washed the walls of a cave-like guesthouse in Spain with blush-pink stucco.

Photography is by JC de Marcos.