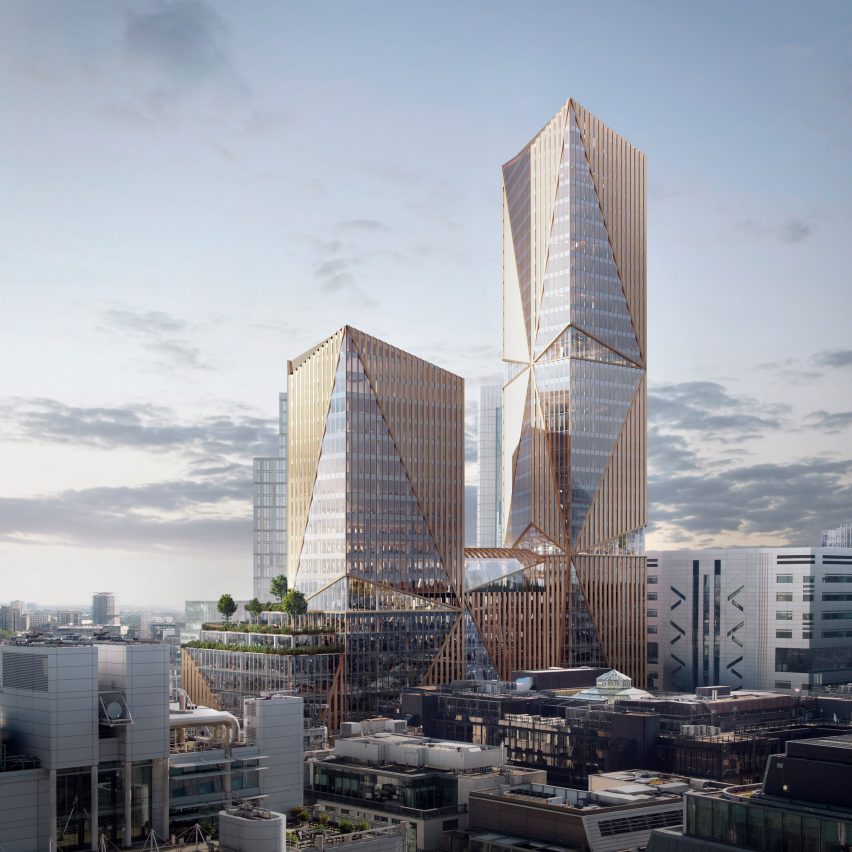 Danish studio 3XN has released its proposal for the 2 Finsbury Avenue office complex in central London, UK, which includes a 35-storey skyscraper.

The 2 Finsbury Avenue scheme, which is 3XN‘s first project in the UK capital, has been developed with British Land for a pedestrianised area in Broadgate.

If approved, it will replace two buildings built by British architect Peter Foggo in the 1980s and override engineering and architecture firm Arup‘s plan for a 32-storey office on the site, which was authorised in 2016 but never realised.

“We are extremely happy and grateful to have been chosen to design 2 Finsbury Avenue at Broadgate in London,” said 3XN’s co-founder Kim Herforth Nielsen.

“Together with British Land, a project was developed demonstrating that architectural as well as development ambitions can come together in a forward-thinking office building.”

As revealed in the visuals, 3XN’s proposal is divided into a 35-storey East Tower and a 20-storey West Tower, both of which will contain office spaces. They will be built next to a sculptural bench by Paul Cocksedge.

The towers are linked by a 12-storey podium that will contain green spaces and communal areas, designed by 3XN to reflect the qualities of the Broadgate area.

“The Broadgate campus offers a fantastic range of amenities, outstanding public spaces as well as workspaces, retail and restaurants and we wanted to introduce these qualities to the building,” said Audun Opdal, senior partner at 3XN.

“Therefore, the building is perceived as a series of interconnected volumes, where the connecting points are the social spaces, amenities and green spaces,” Opdal told Dezeen.

The 2 Finsbury Avenue buildings will have matching facades, characterised by triangular patterns that are made from a combination of glazed areas and gold-hued louvres.

This is intended to animate and visually unify the towers, but will also help them to self-shade to prevent overheating and reliance on air conditioning.

The interiors for the office will be developed in collaboration with behavioural scientists from 3XN’s innovation arm, GXN, to ensure a comfortable working environment.

They will include flexible workspaces that cater for individual and collaborative work as well as spaces for socialising.

“We have worked closely with British Land to conceive an elegant and accessible building that puts people first”, said Opdal.

“The design combines individual workplaces with a variety of internal and external amenity spaces that foster well-being and social interaction and inspires people to engage with each other and work creatively.”

According to 3XN and British Land, 2 Finsbury Avenue’s design is being developed with the goal of being net-zero carbon in both its construction and operation.

The duo states this will be achieved with “a series of forward-thinking environmental initiatives” such as the use of low carbon materials, passive design strategies and possibly the re-use of elements from existing buildings on site.

“Passive design strategies are further employed to minimise heating and cooling demand while maximising the value of select low-carbon and on-site renewable technologies.”

3XN is a Copenhagen-based studio that was founded in 1986 by Nielsen alongside Lars Frank Nielsen and Hans Peter Svendler Nielsen. The studio is currently also developing a pair of towers in Mumbai that are modelled on mangrove stalks and a 200-metre-tall building overlooking the Sydney Opera House.

Elsewhere, 3XN has recently completed a cube-shaped office block in central Berlin and the new headquarters for the Olympics on the shore of Lake Geneva.