Home/Atelier XY covers cocktail bar in Shanghai with over 1,000 insects

Atelier XY covers cocktail bar in Shanghai with over 1,000 insects 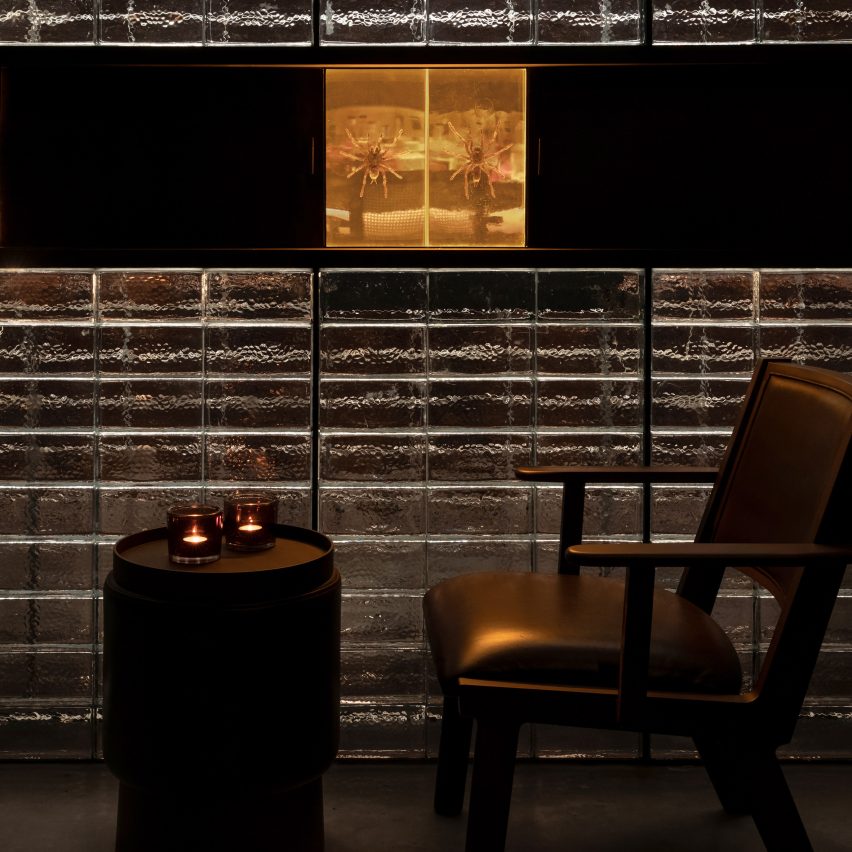 Preserved tarantulas and beetles decorate the shadowy rooms inside this bar in Shanghai, China designed by local studio Atelier XY.

Atelier XY designed the bar, which is called J Boroski, to reflect its owners’ interest in insects.

It’s located in Shanghai French Concession – a region of the city that was occupied and governed by the French state from 1849 up until 1943. Over the last few decades the area has been redeveloped, and it’s now host to a number of eateries, boutiques and quaint music venues.

To enter the bar, visitors walk through an assuming door and up through a dark stairwell.

“It acts as a transition between the noisy exterior and the quiet interior. Once the reception is reached, the unique character of this place slowly reveals itself,” explained the studio.

The main bar area inside is dominated by a 12-metre-long counter where up to eight mixologists can stand and rustle up cocktail orders.

A gridded teak-wood framework covers the wall directly behind the counter and extends up to cover half the bar’s ceiling. Every square opening in the grid is centred by a beetle – in total there are 1,254.

Along the rear of the bar is a glass brick wall, through the centre of which runs a series of see-through blocks that contain 42 preserved Thai Black tarantulas.

It has also been inbuilt with a couple of black-iron drawers – when pulled out, further taxidermy insect specimens are revealed. These can also double-up as small ledges where standing visitors in the bar can rest their drinks.

The wall separates the bar from a couple of dim lounge areas dressed with comfy armchairs upholstered in dark, umber-coloured leather.

A small amount of light is offered by a handful of tealight candles in glass tumblers.

There is also what the studio describes as a “chamber room”, which lies behind a heavy glass-brick door. Inside there’s a laboratory-style space where visitors will be invited to watch mixologists experiment with making drinks, using extravagant tools like centrifuges or rotary distillation machines.

The dark colour palette of the bar seeps through into the bathroom, which is completely clad in glazed, oxblood-coloured tiles. It’s centred by a lengthy wooden sink.

Atelier XY is based in Shanghai and was established in 2018 by Qi Xiaofeng and Wang Yuyang.

Its J. Boroski project is shortlisted in the bar interior category of this year’s Dezeen Awards. It will go up against spaces such as The Berkeley Bar & Terrace by Bryan O’Sullivan Studio, which features ornate plasterwork friezes, walnut wall panelling and a blush-pink snug where guests can retire with their drinks.

Photography is courtesy of Schran Images and Hu Yanyun.

The post Atelier XY covers cocktail bar in Shanghai with over 1,000 insects appeared first on Dezeen.