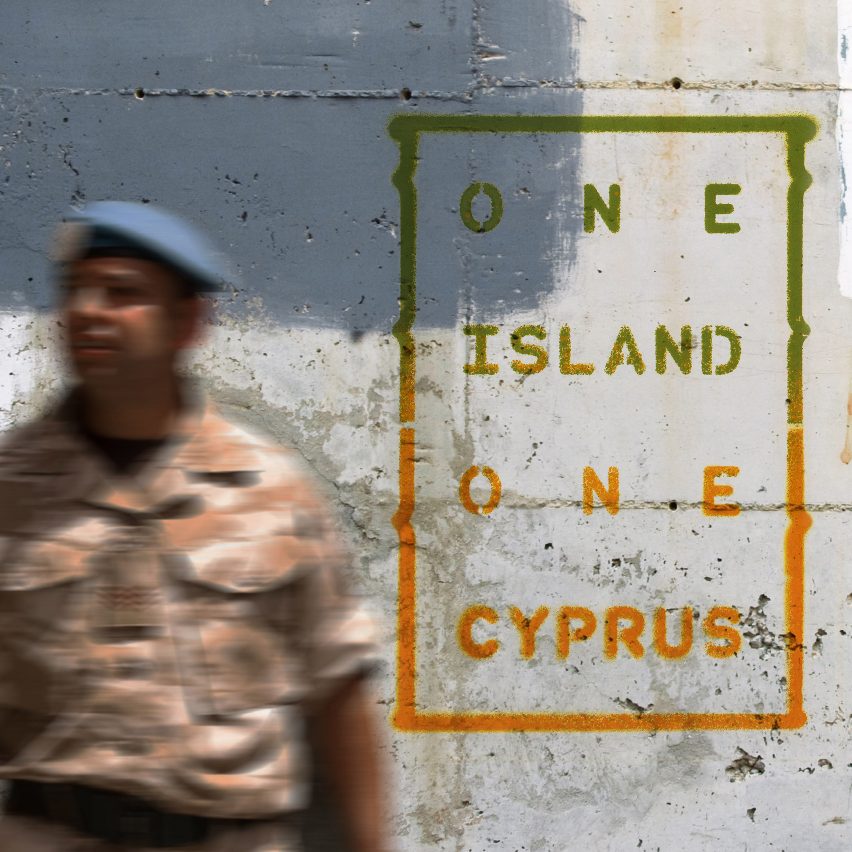 Graphic designer Alexandros Kosmidis has created UNbuffer, a series of postcards that explore the United Nations‘ line between the Greek and Turkish sides of Cyprus.

Kosmidis created the graphic design project as a petition for peace and the end of Turkish occupation of the island.

The project has been shortlisted for Dezeen Awards 2020 graphic design of the year.

UNbuffer is a portmanteau of United Nations (UN) Buffer Zone, the demilitarised zone patrolled by UN peacekeepers, also known as the Green Line.

The zone was established in 1964 when the UN negotiated a peace deal after fighting between Greek and Turkish Cypriots saw Turkish military jets drop bombs and napalm on villages. The line became impassable in 1974 after the Turkish invasion of the Mediterranean island.

“Patrolled by the UN peacekeeping force, it constitutes a constant reminder and remainder of conflict,” said Kosmidis. “It’s an open trauma, both physically and symbolically.”

Kosmidis chose postcards as a medium to literally “deliver a message” about the ongoing division of the country.

“The front of the cards feature images, text and repurposed items found in the landscape of the dividing zone, whose function has been subverted so that they stop representing a message of division and exclusion,” the designer said.

The designer uses the green barrels with white stripes that form roadblocks along the buffer zone as a recurring motif in the project.

Barrels stamped with letters spell out the name of the project in one postcard design. In another, a barrel shape is spray-painted onto a wall around the slogan “One Island, One Cyprus”.

A peace symbol emerges from a background of green and orange military camouflage in one design, and another animated postcard features the phrase “no man’s land” scrolling across it like a ticker tape.

Kosmidis made a stamp for the UNbuffer project, which has the word Cyprus written in Turkish and in Greek on a pattern of tiles decorated with olive branches.

These motifs and colours are taken from the Flag of Cyprus, which features an orange outline of the island with green olive branches below as a symbol of peace.

Kosmidis has also designed collectable pin badges decorated with the UNbuffer designs, which could be worn as a symbol of commitment to reunification.

“This project aims at communicating a message of peace, the end of Turkish occupation and the reunification of the island,” said the designer.

Finnish studio Berry Creative recently used the art of post to spread an important message, creating a series of stamps that change colour when heated with a fingertip to show the grim realities of climate change.